Fonds consists of photographs which illustrate the work and formal attire of the day typical of rural Ontario, horses raised on the farm, period automobiles, architectural structures located on the farm, a tractor-drawn combine, as well as persona...

Collection consist of eclectic assortment of records, consisting of summary of assets and plot index of the Edgeley Burying Grounds, newspaper clippings relating to significant events, as well as a well-documented account of the Superior Propane e...

Fonds consists of a photoprint of Thomas Edward Earls, his band book, and his oath of allegiance and office certification as acting landing waiter of customs. Also included is a halftone photomechanical print of Wallace and a medal of unknown orig...

Fonds constituted of photographs depicting pupils and teachers of Vellore School, 1898, 1900, 1924 (3 photoprints); an image of the congregation of St. Paul's Presbyterian Church, Maple, ca. 1890 in their Sunday finest; an image of a barn rai...

Fonds consists of photographs and postcards depicting Thomas D. Keffer, M.D., 1843-1921 and Jane Keffer (Evans), and various descendants thereof. This small fragmentary fonds is noteworthy for the presence of an early image, ca. 1870, of Dr. Keffe...

Fragmentary fonds consisting of two photographs depicting Roland Keffer as a student in the Edgeley School, School Section # 8, Vaughan Township and as a member of a rifle company of the Royal Canadian Expeditionary Force during World War I.

Fonds consists of photographs, legal documents (mortgages, indentures, etc.), commonplace book (i.e. a volume in which is entered information of any kind to be remember by the compiler), correspondence, financial documents, WWII ration book, greet...

Collection consists of copies of transcriptions of abstract indexes to deeds, nominal and agricultural census records regarding John McDonald and other members of the McDonald family from the Vaughan Township. Included is a copy of the Crown Deed ...

Fonds consituted of transcripts of the reminiscences of Marjorie Page, 1989; map of Vaughan Township, 1924; educational records; Stewart Page's 4th year thesis (1924) at the Ontario Agricultural College re: the agricultural history of Vaughan...

Vellore School Board of Trustees fonds

Fonds consists of two minute books which contains the deliberations of the board, one cash book with entries for receipts and disbursements of money, and a daily attendance register for students in 1922.

Maple School Board of Trustees fonds

Fonds consists of minute book of the Maple School Board of Trustees for the period 1890-1906 recording the deliberations and providing evidence of the transactions and actions of the Board and the standardized public school daily attendance regist...

Fonds constituted of ca. 300 photographs and ca. 100 postcards of military and WWI scenes, Donald and Addison Mackenzie’s political careers, and many of the Mackenzie family members. Also included is correspondence (1819-2002); drawings of the Dal...

Series consists of images from WWI in which Addision Alexander and his brother Ross, both served. Many photos depict other men from Vaughan, Ontario who also joined the war. Includes some excellent scenes of camp life and the destruction wrought b... 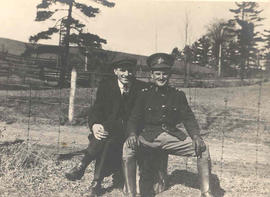