Series consists of annual reports of the St. Thomas branch of the Canadian Federation of University Women.

Series consists of records relating to special interest groups of the St. Thomas branch of the Canadian Federation of University Women, including the Jaunter's Club and the annual Dessert, Bridge and Euchre gatherings.

This series contains letters received by the Clachan Women's Institute.

This series consists of meeting programs of the Boxall Women's Institute.

Series consists of documents relating to the rules and regulations of the St. Thomas branch of the Canadian Federation of University Women, including the constitution, by-laws, duties of officers and guidelines for club archivists.

This series consists of the meeting programs for the Paynes Mills Women's Institute.

Series consists of attendance registers and other documents relating to School Section No. 4, River Road.

The fonds consists of minute and cash books pertaining to the activities of the Fernleigh Women’s Institute. Fonds is comprised of the following series: Series 1: Minutes

The fonds consists of minute and cash books from the Denbigh Women’s Institute. Fonds is comprised of the following series: Series 1: Minutes

Fonds contains the records of the Tottenham Women's Institute.Fonds is arranged in the following series:Administrative RecordsTweedsmuir Histories & Scrapbooks

Part of Soroptimist Club of the Sudbury Nickel District

This scrapbook documents various activities of the Soroptimist Club of the Sudbury District from 1968 to their 25th anniversary in 1974. Included are photographs and newspaper clippings from the Soroptimist Scholarship Award Dinner on November 3r...

File consists of papers regarding the history of schools in Chelmsford, Ontario presented during the regular monthly meetings of the Chelmsford Women's Institute. 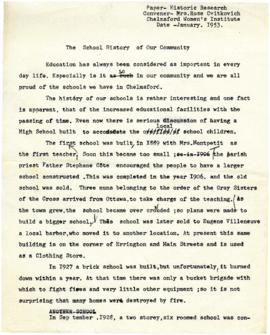 The School History of Our Community

Item is a two page, annotated, typewritten draft paper by Rose Cvitkovich regarding the history of the schools in Chelmsford, Ontario.