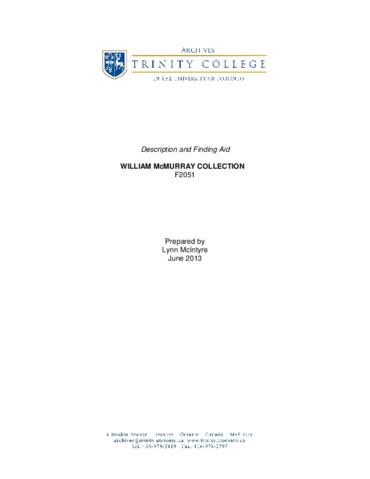 William McMurray, clergyman, was born 19 September 1810 in Portadown, Northern Ireland, the son of Bradshaw and Mary McMurray. The family moved in 1811 to York, Upper Canada (now Toronto, Ontario). At the age of eight William McMurray became a pupil of John Strachan. On completion of his studies at Strachan's school, he took in private pupils. In 1830 he commenced theological training under Strachan and served as a catechist in Mimico, Weston, Thornhill, and York Mills. In 1832 the Society for Converting and Civilizing the Indians and Propagating the Gospel among the Destitute Settlers in Upper Canada sent McMurray, not yet of canonical age for ordination, to act as catechist and lay reader at Sault Ste Marie. He was also appointed Indian agent by Lieutenant Governor Sir John Colborne.

In August 1833 McMurray was ordained Deacon by Bishop Charles James Stewart of Quebec at Frelighsburg [Quebec], Lower Canada. On his return to Sault Ste Marie McMurray was married for the first time, 26 September 1833, to Charlotte Johnston, daughter of trader John Johnston and granddaughter of an Ojibwa chief (she was also known as Onge-Buno- Quay). They had three sons and a daughter.

With Charlotte interpreting for her husband, McMurray was able to translate the catechism into Ojibwa. His rendition was printed in 1834 and his efforts created converts who spread the Gospel at Michipicoten. However, a rift developed between McMurray and Angus Bethune of the Hudson's Bay Company, which was also established at Michipicoten, when McMurray's advice to the natives was to the detriment of company business. He argued that their work manning the company boats interrupted their instruction, prevented them from working the land for crops, required them to work on Sundays, and paid less than they could earn by fishing.

In 1837 Sir Francis Bond Head succeeded Sir John Colborne as Lieutenant Governor and promptly stopped government interference with the native population of Sault Ste Marie. His family ill and his position compromised, McMurray resigned in 1838 and became curate to the ailing John Miller at Ancaster and Dundas. Strachan, now Bishop of the diocese of Toronto, ordained McMurray priest on 12 April 1840. McMurray became rector of Ancaster and Dundas in May of 1841.

In 1852 Trinity College opened in Toronto and McMurray was deputed to tour the United States and solicit funds for the new Anglican institution. His efforts were appreciated by the college and by donors. Columbia College in New York City awarded him an honorary DD. On this and subsequent trips the following year, McMurray succeeded in raising ten thousand dollars for Trinity College. Trinity bestowed an honorary LLD on him in 1857. McMurray was delegated by Trinity's council to tour England for building funds in 1864 and preached to a crowd of seven thousand in St. Paul's Cathedral (London) on the necessity of early religious education. He netted nearly four thousand pounds in donations.

In 1857 he had been made rector of Niagara-on-the-Lake and built an impressive rectory. However, the county seat was moved to St. Catharines shortly thereafter and the congregation was reduced by more than half. In 1867 the parish was forced to issue fifteen debentures to cover the debt of the rectory and McMurray took twelve of those himself. In this personal financial crisis he sought assistance from friends he had made in England. McMurray replaced his friend Thomas Brock Fuller as rural dean of Lincoln and Welland when Fuller replaced Alexander Neil Bethune as archdeacon of Niagara. McMurray had solicited votes in favour of Alexander Neil Bethune for the bishopric at Kingston. Fuller, elected to the See of Niagara, collated McMurray as archdeacon in 1875.

McMurray was married for the second time to Amelia Baxter on 4 November 1879. He died 19 May 1894 in Niagara-on-the-Lake, Ontario.

The collection consists of several diaries written during trips to the United States and England during the 1850s and 1860s in search of building funds for Trinity College. From his three trips to the United States in 1852 and 1853 there are five notebooks as well as a letter concerning a resolution towards the endowment of Trinity College. There are 98 Cartes de Visite as well as an extensive diary from his 1864 trip to England.

The diaries from 1852-1853 were donated by McMurray’s granddaughter, Mrs. A.H. Ewing, Montreal. The 1864 diary was transcribed by Elizabeth McMurray Warren Stoutamire, great, great granddaughter of WM, in 1988. The source of the Cartes de Visite is unknown.