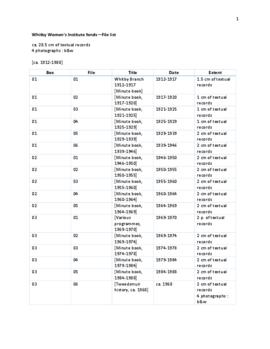 The Whitby Women's Institute (WI) was formed in the summer of 1897, the result of a meeting convened for the women of South Ontario. Soon after, the Whitby WI held another meeting and confirmed its president and executive team, which included elected first and second vice presidents and a secretary-treasurer. At the time of its creation, the Whitby WI was the second of its kind in the world.

The first WI had been formed several months earlier in Stoney Creek, Ontario by Adelaide Hoodless. Hoodless, a wealthy mother of four residing in Hamilton, had lost her youngest son in 1889 due to an intestinal ailment caused by the consumption of impure milk. Following this, Hoodless dedicated herself to promoting domestic science education for girls and women. The WI, as Hoodless envisioned it, would unite women living in rural areas with a goal of improving their homemaking through the study of domestic science.

The Whitby WI shared the goal of its predecessor--"dissemination of knowledge relating to the home." During the second Whitby WI meeting in October 1897, 23 members heard lectures on "bacteria as they affect the home" and bread and butter making. The WI would go on to engage in lobbying activities, submitting resolutions to municipal and provincial governments, and participate in many community events. By the end of 1897, the Whitby WI’s membership had grown to 73.

Over the years, the Whitby WI also involved itself in the regional community. The organization donated gates to Whitby Town Park in August 1932, assisted with the establishment of a local chapter of the Victorian Order of Nurses, created a rest room in the downtown area for farmers and their families (1914-1918), gave shrubs and flowers to local schools (1922), arranged for scholarships for students, operated a stall at the Oshawa fair, prepared holiday gifts for residents of care home Fairview Lodge, and raised money for local hospitals. Perhaps most significantly, the WI developed a resolution which resulted in new Ontario government regulations mandating the wrapping of all bread for sale in the province, an important sanitary measure.

The Whitby WI appears to have focused on the concerns of white, middle-class, Christian women in the region. The organization's Tweedsmuir histories demonstrate this tendency, centering on the region's white European pioneers and their descendants.

The organization disbanded in the summer of 1988.

After the Whitby WI disbanded in the summer of 1988, former members considered turning over their Tweedsmuir History and minute books dating back to 1912 to the district secretary of the Ontario South WI. However, it appears that members Aleta Campbell and Josephine Smith kept these materials instead. The WI records were eventually given to Archives at Whitby Public Library (ca. 2014), though it is not clear who the donor was at this time.

The fonds consists of the Whitby WI's minute books, one Tweedsmuir history, and event programmes. Records are arranged chronologically in subject files.

Several pages have fallen out of minute books and are tucked within book covers. Additionally, minute book spine labels have become detached as a result of tape adhesive degradation.

The archivist maintained records in their received physical order.

Some records in the fonds may be protected under copyright. Permission to reproduce copyrighted materials must be obtained from the copyright holder(s). See archivist for details.