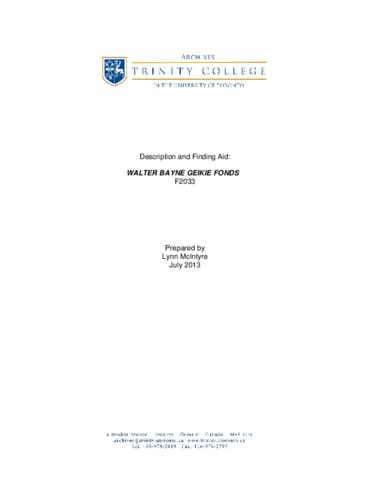 Walter Bayne Geikie, doctor and educator, was born on 8 May 1830 in Edinburgh, Scotland. He was the son of Reverend Archibald Geikie, who brought his family to Canada in 1843. Geikie began to study medicine in 1849 with Dr. John Rolph in Toronto, Ontario, and was licensed by the Medical Board of Upper Canada (Ontario) in July 1851. After spending two years on a full post-graduate course at Jefferson College in Philadelphia, he took his MD and returned to Canada. He practised in Bond Head from 1851 until 1955 when he moved to Aurora in the County of York and set up a large and successful practice. He married Frances Miriam Woodhouse in February 1854. They had six children, two of whom died in infancy. The four who survived were Walter Woodhouse, Archibald James, Annie Laura, and Frances Ethel.

In October 1856, Dr. Rolph, Dean of the Victoria Medical Faculty at Victoria College in Cobourg until his death in 1970, asked Dr. Geikie to join the department as a professor. Geikie accepted and the two doctors made a partnership agreement in 1857. Dr. Geikie lectured on Materia Medica and Therapeutics, and Obstetrics and Diseases of Women and Children. During these years, Dr. Geikie also taught Anatomy, Descriptive and Surgical, Principles and Practice of Surgery, and Practice of Medicine and Clinical Medicine, the latter at Toronto General Hospital. In 1867 Dr. Geikie returned to Great Britain to do post-graduate work and take the examinations of the Royal College of Physicians of London, and the Royal College of Surgeons of Edinburgh.

Just before his death in 1870, Dr. Rolph resigned his position at Victoria Medical Faculty and Dr. Geikie resigned shortly thereafter. He then joined the Medical Faculty of Trinity University. By 1871 Trinity Medical Faculty, which had existed previously from 1850-56, was re-established as a department of Trinity University. Dr. Geikie became Dean in 1878 and continued in that capacity, as well as being on the consulting staff of the Toronto General Hospital and the Hospital for Sick Children, until 1903. That year, after expressing his opposition to the College's amalgamation with the University of Toronto Medical Faculty, Dr. Geikie resigned. His health failed gradually over his final years and he died in Toronto on 12 January 1917. He was buried in Mount Pleasant Cemetery.

The fonds consists of the signed agreement between Doctors Geikie and Rolph in 1857 in which they become partners. There is some correspondence and a number of journal articles written by Dr. Geikie on various topics. Many tributes to Dr. Geikie, printed and handwritten, are included.