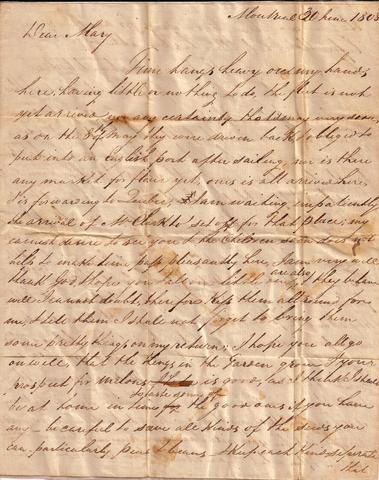 Richard Hatt II was born 1769 in London, England, son of Richard Hatt I (1736-1797) and Mary Draper (1741-1791). Hatt moved to Newark (Niagara) in 1792 and worked for 3-5 years in the general store of John MacKay, becoming a partner in the business. Hatt persuaded his father to follow him to Upper Canada, and in 1795 he petitioned for land for his father, brothers (Augustus and Samuel) and sisters (Mary and Susannah), saying that his father was about to come to Canada and bring materials for erecting mills for large-scale farming, as well as several indented men servants. He requested a grant on some good stream (plus land for six in his family and six servants) between Burlington Bay and Long Point. He petitioned again in June 1797 saying that his father had come in the fall of 1796. His father got 1200 acres for himself plus 1200 acres each for Samuel and Augustus. No land was granted to Mary and Susannah, as it was not usual to grant lands to unmarried women. Richard I passed away in November of 1797, shortly after his land was granted.
Samuel and Richard II chose lands in Glanford and Ancaster Townships. In 1798, Richard built the Red Mill, a grist and saw mill below the Devil’s Elbow. Its 3 run of stone could turn out 20 bags of flour and 20 bags of pot barley per day. The water wheel generated about 15 horsepower. He also built a distillery to use up mildewed or smutty grain. In 1799, Richard had a road built to Dundas Valley in order to bring settlers from that direction to his mills. This played a large role in opening up the area for travel. In December of 1799, Richard married Mary Cooley of Ancaster. Together, they had ten children: Mary (b. 1800); Susannah (b. 1802); Richard III (b. 1803); Ann Draper (b. 1807); Samuel Price (b. 1809); Andrew (b. 1809); John Ogilvie (b. 1811); William Galway (b. 1814); Thomas Collyer (b. 1816); and Margaret Matilda (b. 1819, after her father’s death).
Realizing the remoteness of his mills, Richard decided to move to Dundas Valley. Consequently he bought most of the land around Dundas Creek, plus the water rights. On September 20 1800, he bought 78 acres of Lot 11, Concession 1 of West Flamborough, the Webster’s Falls property. Also in 1800, Hatt was appointed justice of the peace, a position he served until his death.
In 1801, Richard and Samuel asked for permission to open a canal at the head of Cootes Paradise to permit them to erect a merchant grist mill there. No action was taken at the time because the village had not yet been surveyed. In 1802, the brothers submitted a revised petition and it was recommended that a lease be granted for half an acre west of Thorpe’s bridge to erect a store house there.
In 1810, Richard at 87 others petitioned for a new district to be formed with Cootes Paradise and its County Town. In another petition, Richard offered $500 towards a court house while 77 others promised $3460 more. Hatt was, by then, a successful businessman, and he was also passionate about developing the town.
In the War of 1812, Capt. Richard Hatt commanded the Dundas Company at Queenston, and as a Major had a detachment of 5th Lincoln militia at the Fort Erie battle of Nov 28 1812, where his brother-in-law Col. Johnson Butler was killed. At the Battle of Lundy’s Lane, July 24 1814, Richard was severely wounded and invalided home. He was twice recommended for his bravery in General orders.
After returning home from war in 1814, Hatt was appointed judge of the new district court and also of the surrogate court. That same year, a post office was established in Hatt’s store (in the Town Hall triangle) and he was made 1st postmaster, doubtless a partial reward for his war service and also because his ‘Dundas Mills’ (and his store) had acted as an address for mail and as an unofficial post office. The new post office was named ‘Dundas’ after his mills, and Dundas Street.
In 1817, Hatt began a life of politics, entering the House of Assembly after successfully contesting a by-election in the riding of Halton. He also began to pursue his interest in writing and publishing when, in 1818, he brought Richard Cockerel to Dundas to publish the 1st edition of the ‘Upper Canada Phoenix’, the first newspaper in Gore District. Hatt died while still in office at the House of Assembly on Sept 26, 1819.

The custodial history of the records in this collection is not clear; the provenance of most of the documents has been lost, giving no indication who created or used a number of the records. The result is that this collection is comprised of Hatt family records that include records created by the Dundas Historical Society Museum while researching Richard Hatt and his family.

The collection is comprised of a range of letters, petitions, grants and notes from a number of activities, including correspondence, leases, land patents, and wills. Also included are items that were not acquired during the lifetime of Richard Hatt, but relate to the Hatt family in Dundas and Ancaster. Examples include newspaper articles about the Hatt family businesses, historical tours of Hatt family property, and death notices of descendants of Richard Hatt.

Some items encapsulated, some photocopied, many items from 1800s are very fragile and deteriorating. Some items have been transcribed. Due to the fragility of the material, archivist supervision is required during viewing. Care must be taken when handling materials.

A detailed inventory is available.