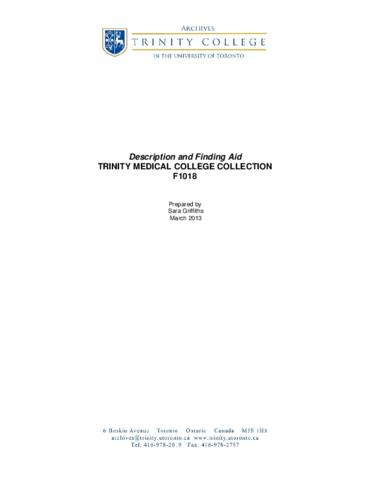 From 1871-1903, Trinity Medical College thrived as a proprietary medical school associated with Trinity College prior to Trinity’s amalgamation with the University of Toronto in 1904.

Trinity Medical College can trace its beginnings to the Medical Faculty at Trinity College, which existed from 1850 to 1856. Despite the apparent success of this early Medical Faculty, all six founding members resigned in 1856, most likely due to tensions around the strict requirement that all Trinity students be members of the United Church of England and Ireland (the Anglican church).

Re-establishment of a medical school at Trinity was considered by committees of the Trinity Corporation in 1863, 1866, and 1867 but nothing came of these efforts. In 1869-70, further discussions resulted in the provisional appointment of four of the founding members of the former Medical Faculty as a Board of Medical Examiners for Trinity College (Dr. James Bovell, Dr. Norman Bethune, Dr. William Hallowell, and Dr. Edward M. Hodder). In addition, the statute necessitating declaration as a member of the Anglican church was amended in such a way that the requirement still stood but in practice students did not have to make the declaration, effectively allowing non-Anglican students to register at Trinity.

In 1871, the four examiners were appointed as the first professors of the reconstituted Trinity Medical Faculty, and Dr. W.B. Geikie, eventually Dean of the Medical College, was appointed as one of two new examiners. By the end of 1871, a new building was erected on a site close to the Toronto General Hospital and several professors had been added to the faculty. Over the next several years, under the diligent administration of Dr. Geikie, the Trinity faculty developed a strong reputation as a provider of quality medical education and training.

In 1877, influenced by the alleged actions of the rival Toronto School of Medicine to effectively block Trinity students from competing for University of Toronto honours and prizes, the Trinity Medical Faculty, with Trinity College consent, applied for and obtained from the Ontario Legislature an Act of Incorporation as an independent teaching body called Trinity Medical School. Incorporation gave to Trinity Medical School the power to affiliate with any university granting medical degrees, thus allowing their students to take examinations at any degree-granting University they chose. In practice, however, most Trinity medical students continued to take their exams at Trinity. However, both the newly-independent Trinity Medical School and Trinity College continued to view the medical school as the medical faculty of the college.

By 1879 a new wing was built onto the Trinity Medical School facilities, but there was a growing view on the part of the provincial government that competing proprietary medical schools could no longer provide satisfactory medical education that increasingly required additional teaching facilities and newer, more complicated and costly equipment. The political shift toward one strong publicly-financed medical teaching faculty in Toronto was exemplified in 1887 when the Minister of Education invited Trinity Medical School and the Toronto School of Medicine to come together as the Medical Faculty of the University of Toronto. The Toronto School of Medicine accepted the offer, but Trinity Medical School refused.

Perhaps in support of their medical school’s view that independent medical education could continue to provide everything required, the Trinity Corporation provided some of their limited funds for improving teaching facilities and purchasing equipment and upgraded the medical school faculty to college status in 1888: Trinity Medical School became Trinity Medical College.

Although the final agreement on federation did not occur until October 1904, the medical faculties were amalgamated in 1903. In June of that year the resignations of all Trinity Medical College staff were received. The faculty members, with the exception of Dean Geikie, became members of the Faculty of the University of Toronto and the amalgamated faculties met for the first time in October 1903.

This collection consists of administrative records, calendars, student academic records, and records of student life at Trinity Medical College. Administrative records include Minutes of Corporation, records related to the amalgamation of medical faculties at Trinity College and the University of Toronto, correspondence files, a small number of general administrative and financial records, a Register of Students, and miscellaneous reports. Student records include textual and photographic records of academic standing and participation; records of student life include documents and photographs related to college groups, committees, societies, and teams. Also in the collection are a cap, belt, (and blazer purported to be from Trinity Medical College), as well as a manual press of the seal of Trinity Medical College.

Some bound volumes and original documents are fragile, handling or copying at discretion of the archivist.