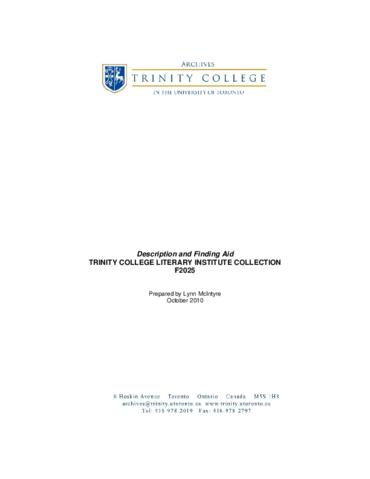 1.3 m of textual records and other materials

The Trinity College Literary Institute was founded in 1854 with the amalgamation of the Debating Society and The Union. The student debating society of the Diocesan Theological Institute at Cobourg started sometime between 1842 and 1849. The first extant minutes from 20 April 1849 refer to the "yearly proceedings" being closed. This statement implies that it had existed at least since the Fall of 1848. The "Cobourg Star" dated 5 April 1848 reports the founding of a debating society in the town the previous evening. However, it is not mentioned as being associated with the Theological Institution. There is also some reason to believe that the Society was founded early in 1846, when the Diocesan Theological Institute was reorganized and expanded. By the summer of 1849, the Society had eighteen members and was holding weekly debates. A room was set aside for it at Cobourg, heated in winter by a wood stove. A student Union was formed shortly after the opening of Trinity College on Queen Street (1852) in Toronto.

The Trinity College Literary Institute is one of the student governments of Trinity College and has constitutional authority over specific traditional events held at the College by the students, most notably the regular debates. According to the constitution, "[t]he objects of the Institute shall be the fostering of cultural activities and the encouragement of public speaking."

The permanent officers are the Honorary President, the Speaker, the Deputy Speaker, and the Treasurer. The Lit is governed by a Council consisting of a Prime Minister, Government House Leader, Clerk of the House, Keeper of the Mace, and two Councillors who are First Year students.

[Sources: "Constitution of the Trinity College Literary Institute" revised and amended 1974;
"The Reminiscences of Arthur Jarvis"; "A History of Trinity College Toronto 1852-1952"]

Fonds consists mainly of administrative records of the Trinity College Literary Institute, including the Debates and Conversazione Committees. These records show the wide variety of activities in which the Trinity College Literary Institute has traditionally been involved and the large part played by “The Lit” in the life of the College. Annual social events included TCLI dinners with some well-known speakers, as well as the annual formal dance, the Conversazione which began in 1871. Elaborate programs, posters and graphic works were produced to promote and advertise these and other events.

This collection of records was donated by officers of the TCLI after their terms of office. Some material such as posters, invitations and other ephemera have been collected by the Archivist.

Files have been organized by the archivist.