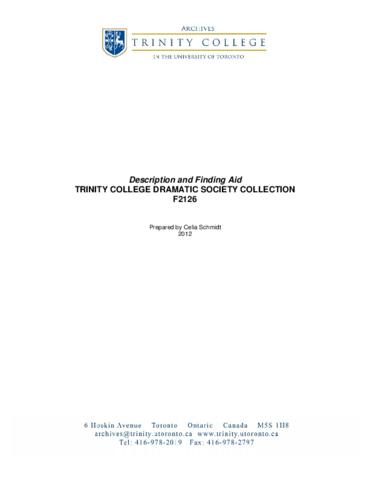 1.48 m of textual records and other material

The Trinity College Dramatic Society (TCDS) is known to have existed as early as 1919, with annual productions beginning in 1921. Little is currently known about dramatic activities at the University of Trinity College during the years between the insolvency of the Dramatic Club in 1894 and the emergence of the TCDS, but a few records exist – and are described within this collection – testifying to the existence of dramatic activities, however casual, during those years.

In 1921 the operation of the Hart House Theatre at the University of Toronto was transferred from The Player’s Club to the Board of Syndics. Trinity College had federated with the University of Toronto seven years earlier and sought to obtain the Hart House Theatre, under its new management, as the venue for its annual productions. Since the opening of the George Ignatieff Theatre (GIT) in 1979, it has formed the main venue for the TCDS’ productions. However, plays have also been held in Cartwright Hall (at Saint Hilda’s College), the quadrangle, Seeley Hall, and the chapel.

Over the years, the TCDS’ activities have increased. At first, one play was produced per year. Later, two or three additional short or student-authored plays were also produced per year. Nowadays several major productions are mounted every school year, as well as special events such as an orientation (or frosh) week play and “Shakespeare in the Quad.” The TCDS arranges the College’s contributions to various intra- or inter-university drama festivals and organizes events such as play readings, workshops, screenings, revues, and parties. Every year, the TCDS celebrates students’ involvement in dramatic endeavours with the “Iggies” (short for “Ignatieff”), an award ceremony in the style of the Academy Awards, where students are presented with “Iggy Awards.”

All students of Trinity College are automatically members of the TCDS and events are mainly student-run. An elected executive handles the administration of the TCDS.

Records which now comprise this collection were previously a myriad of small accessions received from almost as many sources, including students, alumni, faculty, and staff. In some cases the donor of the material is unknown. However, in many instances not only is the donor known, these donors were involved in the production to which the records they donated pertained. These donors were directors, stage managers, make-up designers, set designers, lighting designers, actors, TCDS Executive members, theatre managers, and so on. The multitude of tiny accessions were not conducive to access or the astute management of the records over time, and often were of less significance by themselves than in relation to other TCDS records (that is, they did not already form parts of meaningful fonds) so this collection was created.

As described in the “acquisition history” note above, this collection has been created from many sources. It would be impossible to determine all of the donors who contributed material that is now in this collection, but a fairly comprehensive list has been established and is given in the “Provenance access points” field.

Arrangement of most series and files was imposed by the archivist. In many cases, original order had been lost or was indiscernible. Within some files, original order has been preserved, as in the case of most administrative records. Scrapbooks are also in their original arrangement. As a consequence of the rearrangement of materials, all file titles were supplied by the archivist. Square brackets, i.e. [ ], were only used when information on the file title was guessed or determined from outside sources, in addition to other notations (such as question marks) in accordance with Rules for Archival Description.

Various copyright holders. It is the researcher's responsibility to obtain permission to publish any part of the collection.