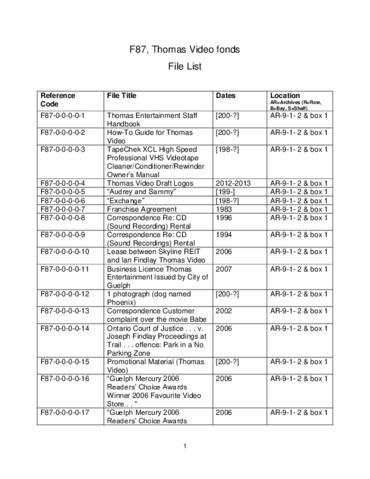 Ian Findlay opened Thomas Video on March 11, 1983 when he was eighteen years of age. First located on Macdonell Street in Guelph, the store moved to upper Wyndham in 1995 and later Baker Street in 2000. Other stores followed in Rockwood, Kitchener, Waterloo and Hamilton.

Thomas Video carried movies various formats such as VHS, DVD and later Blu-Ray. The store also carried PlayStation, Xbox Box and Nintendo video games. The store boosted a membership of over 35,000 and an inventory that grew to include some 28,000 titles. These titles included independent and or foreign films not easily available at other video retail locations. Membership to Thomas Video was free.

Over the years Thomas Video received various awards such as the Guelph Mercury’s Reader's Choice Awards for favourite video store in 2006. Thomas Video also received a Certificate of Appreciation from the Upper Grand Distrist School Board in 2013 for participating in the Community and Work Transitions Program.

Thomas Video closed after 34 years of successful operation in January 2017.

Prior to their transfer to Guelph Public Library Archives, the records were in the custody of Ian Findlay who operated the business from 1983 to 2017.

Fonds consist of records created and or accumulated in the course of the store's business activities. Included is a staff handbook, lease and franchise agreements, a business license, promotional materials, correspondence files, and draft logos. The photographs are of Phoenix the dog who greeted customers at the store and of one employee.

These records were donated by Ian Findlay.

To view these records, please consult File List F87 to narrow down your search and to identify specific boxes for retrieval. Order the boxes from the Guelph Public Library Archivist.