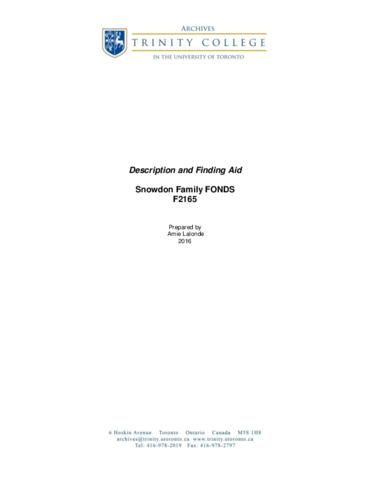 The Venerable Archdeacon Johnston McLelland Snowdon, Anglican clergyman, was born on 6 September 1860 in Kincardine, Ontario. He was the son of John and Mary Cochrane Snowdon, both of Ireland. Snowdon attended Kincardine High School before entering Queen’s University, Kingston, Ontario, where he obtained a BA in 1885. He enrolled at the University of Trinity College, Toronto, in November 1884 and received his MA in 1890. He was ordained deacon in 1886 and became a priest the same year.

Snowdon was rector of Trinity Church, Ottawa, from 1886 to 1888, curate of St. George’s Church, Ottawa, from 1888 to 1890 and rector from 1890 to 1928. He was appointed canon in 1916 and Archdeacon of Ottawa in 1920. In 1928 Snowdon received a DD,honoris causa from Trinity College.
Snowdon married Caroline Elizabeth Magee in July 1891 in Ottawa, Ontario. They had three children, Mrs F.W. Greaves, Kathleen (Mrs Massey Baker), and Charles Allen.

The letters were a gift to the archives from Charles Burton (grandson of J.M. Snowdon), who received them with instructions that they were eventually to go to the Trinity College archives, from his great aunt Mrs. (Kathleen) Massey Baker, daughter of The Venerable Archdeacon J.M. Snowdon.

Materials arranged by the archivist