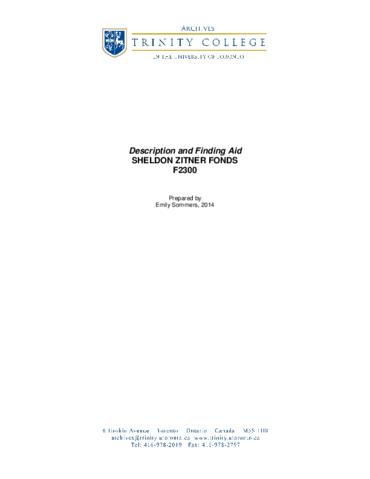 Sheldon Paul Zitner was a Professor of English at Trinity College and a published poet. He was born on April 20, 1924 in Brooklyn, New York, the eldest son of Dora and Morris Zitner and brother of Robert J. Zitner (b. 1932). He was educated at Townsend Harris High School (Flushing, New York) and subsequently enrolled in Brooklyn College at the age of 16. After three years he enlisted in the army and served in the United States Air Corps in the South Pacific during the Second World War. Upon his return he continued his studies and received his BA (1947), an MA from New York University (1948) and a PhD from Duke University (1955). In 1951 Prof. Zitner became an assistant professor at Hampton Institute (now Hampton University) in Hampton, Virginia. In 1957 he took a position in the English department at Grinnell College (Grinnell, Iowa) where he held several positions, becoming the Carter-Adams Professor of Literature (1963) and Roberts Honour Professor (1964). He also served as the chairman of the Department of English (1960, 1962-63) and the chairman of the Division of Humanities (1964-68).

In 1969 Zitner came to Trinity College. His research interests included Shakespeare, Renaissance literature (especially drama), literary criticism, and contemporary poetry. He taught a variety of courses at the undergraduate and graduate levels and supervised numerous doctoral theses. He published extensively in academic publications and edited three scholarly editions: Shakespeare’s Much Ado About Nothing (Oxford University Press 1993), Francis Beaumont’s The Knight of the Burning Pestle (Manchester University Press 1984), and Edmund Spenser’s The Mutabilitie Cantos (Thomas Nelson and Sons, 1968). During his career Prof. Zitner took on many administrative and committee positions within the Department of English and was a member of professional organizations including the Shakespeare Association of America, the Toronto Renaissance and Reformation Colloquium, the Association of Canadian University Teachers of English, the Northeastern Modern Language Association, and the Society for Textual Scholarship.

Upon his retirement in 1989, Zitner began to write poetry full-time. His first book of poetry, The Asparagus Feast, was published by McGill-Queen’s University Press in 1999, followed by Before We Had Words (MQUP) in 2002, The Hunt on the Lagoon (Goose Lane Editions) in 2005, and a small chapbook, Missing Persons (Junction Books), in 2003. His poems were published in various literary publications including The Walrus, Fiddlehead, and The Nation. In the years prior to his death, he began working on a translation project with Herbert Batt, “Chinese Vernacular Poetry, 1919-1949”, which remains unpublished. He maintained strong ties with Trinity College after his retirement and was an active member of the Friends of the Library. In 2001 he received an honorary doctorate of sacred letters from the College in recognition of his many years of teaching.

After Zitner’s death, records were re-arranged at the file level by his literary executor Fred Tromly. Subsequently, materials have been arranged into series by the archivist. Electronic records have been migrated to PDF/A format for long-term preservation and access.