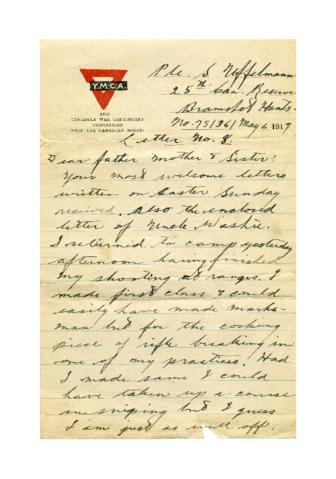 Letter from Sheldon Uffelman to Jacob, Eliza, and Gladys Uffelman

[Page 1]
YMCA [Letterhead]
Pte. S. Uffelmann
25th Can. Reserve
Bramshot Hants
No. 751361 May 6 1917
Letter No. 8
Dear Father Mother + Sister:
Your most welcome letters written on Easter Sunday received. Also the enclosed letter of Uncle Washie. I returned to camp yesterday afternoon having finished my shooting at ranges. I made first class + could easily have made marks-man but for the corking piece of rifle breaking in one of my practices. Had I made same I could have taken up a course in sniping but I guess I am just as well off.

[Page 2]
We had very fine weather the two weeks we were at the ranges + enjoyed being under canvas. Have not had rain for nearly three weeks + is getting very dry. Also threw two live bombs and had one nights shooting by star shells. Also received your parcel yesterday in tin box which was in good condition. Also received the money + a parcel from Aunt Rosie. Also chocolates from Walter but box had been broken + we received about half of contents. Received a letter from Uncle Washie in which he stated that Lloyd was

[Page 3]
[At top of letter, upside down: Ill send Sheldons last letter but send it back as Gladys will want to read it. Elda Mathers is here]
reported missing. It sure was a surprise to me + we are endeavouring to get full particulars as to his whereabouts. I sure hope that he is safe + has not been killed. It seems but a very short time since he was up to see us + can hardly realize that he has gone. I have asked Willie several times to come with me to have our photo taken together but he always says that he does not like to have his photo

[Page 4]
taken + does not think it necessary as we both had same taken when we left Home. Even so I think I will have mine taken sometime this week. In regards to fountain opens I do not feel safe in getting one here as they are very high priced + can assure you that they are just as cheap if not more so at home. Am glad to hear that the seed business is going on fine + hope your profits will surpass all seasons of past. Also received parcel from Uncle Adam. How does Uncle Adam like his car. Does he run it himself.

[Page 5]
As to your car being but a mere ford you should worry. I can assure you that you will get more out of same at less expense than those with larger cards. it certainly is great for motoring over here as roads are all academized or paved. Also received a letter from Louise stating she was quite well. I wish you would have her up for a week or two as a change certainly would do her a

[Page 6]
world of good + I am sure she would only be to glad to come + could give you a helping hand. Hope Walter Dietrich + Louise Guenther get along out west. By the way you stated that you have just received letter of Feb 11th. Well you can understand that at times letters are long delayed. I have written once a week up to present + shall always continue to do so + you can look forward for one a week. Now that I am numbering them you will be able to know whether any of them go astray + wish you would acknowledge receipt of each

[Page 7]
by number so that I will know whether you have received them. Today it is very windy + will be in all afternoon + evening as I have quite a few letters to write. After church this morning Oscar Weichel, Graham Mathers + I went to communion and the Y.M.C.A. There were about fifteen in all at same. In regards to addressing mail it is not necessary to put on army Post Office. P. F. Coy. Kindy address