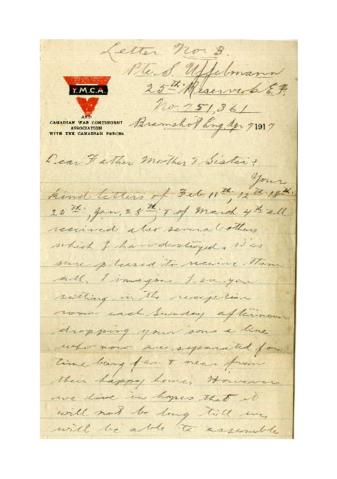 Letter from Sheldon Uffelman to Jacob, Eliza, and Gladys Uffelman

[Page 1]
YMCA [Letterhead]
Letter No. 3
Pte. S. Uffelmann
25th Reserve C.E.F.
No. 751361
Bramshot Eng Apr 9 1917
Dear Father Mother + Sister:
You kind letters of Feb 11th, 12th, 18th, 20th, Han 28th, + of March 4th all received also several others which I have destroyed. Was sure pleased to receive them all. I imagine I see you sitting in the reception room each Sunday afternoon dropping your sons a lone who now are separated for time being far + near from their happy home. However we live in hopes that it will not be long till we will be able to assemble

[Page 2]
together + I know that we will be more contented + prepared to do anything when we do. I am still in the best of health as is Willie. I am still in quarantine but as the M.D. said yesterday that I was better. I hope to be out tomorrow. I just finished writing a letter to Orly, D.W. Elsley, and nine others + will wind up with one to you. I hope you receive the postals. I mailed you on Tuesday. Willie + I received a letter from Aunt Rosie the other day which I still have to answer. I have taken the opportunity I had

[Page 3]
during past week for letter writing + have sent off no less than 25 letters. Also wrote Uncle Adam a letter which I hope he receives. Also have mailed you papers which I hope you receive. Yesterday was Good Friday + I presume you have had a good square meal + fine holiday at home. There was no holiday for the boys here. Willie was away to the ranges + I spent the forenoon in hut, in afternoon wrote

[Page 4]
letters + in evening went to the concert in our mess room given by a troop from Portsmouth. It was as good as one could wish to see + was thoroughly enjoyed by all. This afternoon I expect to go to the football game between two Battns. They sure do have fine footballers over here. I have not heard from Lloyd since he has gone to France. Willie has been writing home every week but it might be that some of his mail has been held up. I just received one letter dated Han 10th, another

[Page 5]
chap has just received a letter which was sent last Sept, so you can readily see how the mail travells at times. I have made it my duty to write at least once a week + hope you have received all mail regularly. There is a draft of 100 men from our Battn to leave for France the early part of next week. They have all been warned but none of 118th boys are on same. I have been stone broke for a month

[Page 6]
now + have had to take in washing in order to get some cash to buy necessarys. I hope you have sent me the money by now. $20.00 as I expect to receive same next week as I need it in the worst way and am anxiously awaiting for same. I am always hungry it seems + cannot get sufficient to satisfy my appetite. However the war will be over this summer + it will not be long till we are able to return. It has been snowing + raining for past two weeks but today it is quite warmer + fine.
[End of letter]