File 7 - Letter from Sheldon Uffelman to Jacob and Eliza Uffelman 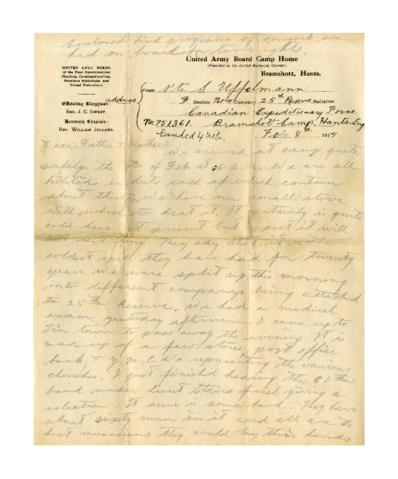 Dear Father & Mother:
We arrived at camp quite safely the 4th of Feb. at 6 a.m. We are all billeted in huts each of which contain about thirty. We have one small stove with which to heat it. It certainly is quite cold here at present but expect it will not last long. They say that it is the coldest spell they have had for twenty years. We were split up this morning into different companys being attached to 25th Reserve. We had a medical exam yesterday afternoon. I came up to Tin(?) town to pass away the evening. It is made up of a few stores post office bank, & Y.M.C.A’s representing the various churches. I just finished hearing the 80th band under Lieut Stairs finish giving a selection. It sure is some band. They have about sixty men in it and all are the best musicians they could lay their hands

[Page 2]
On. They handle the most difficult music & certainly is worth while listening to it. They play every night at various places except Sat. & Sunday. The first party I run into was Eruthers(?) who came over with the 71st band. You remember him. He used to play trombone in the Waterloo band. He gave me full information about the place. We might get our six day leave Sat. night so Willie & I expect to go to London for same. In regards to our trip across the ocean I might say that I thoroughly enjoyed it. I was not sea sick although I felt dizzy for a couple of days but soon got over it. We had two days of very rough weather. Had a heavy gale. The wind was travelling between eighty & ninety miles an hour & no one was allowed on deck as they could have been washed overboard. Every now & then you could see the boys running to the rail & emptying out. We got plenty to eat & find the grub better here than in Canada. The only think is the handling of English money. I always figure mine up when I get change to see that they did not do me. However it does not take long to get on to it but you are certainly weighted down with change.

[Page 3]
We have to get up at 6.30 breakfast at 7 am. First parade at 7.45. Drill till 12 am & dinner. Fall in at 12.45 & drill until 5 pm. We are then off until 9.30 pm when all have to be in. Lights out at 10.15 pm. Drill until 12 am Sat. I have afternoon off. We are fourth miles south of London. Have church parade Sunday morning. Could not finish this letter last night so will try & finish it now. I am down at Lithook on Fatique work for to-day & have two hours rest. We are on fatigue for our division & our work this morning is unloading coal. There is about fifteen of us & we emptied about five car load of coal. Will be through at 4 p.m. There is a draft at the station now on there way to France. There has been a draft of men taken out of here every day

[Page 4]
Since we came. It will be at least eight weeks before any of us will be prepared. They sure have to soldier here. It is by no means the same as it was in Canada. The trains here are only half the size of our coaches & engines also. They are divisioned off into six or eight sections to one ward & you have to pay as you enter. They are well padded seats but the only inconvenience is that there are no latrines. However they make good time. We left Liverpool at 7.30pm & arrived a distance of about 450 miles. There are plenty of holy trees around here. Money runs here in farthering = 6c (a penys half cent) pennys, threepence = 6c. sixpence = 12c one shilling = 24c florin = 48c half crown = 60c crown = $1.20 10 shilling bill = $2.40 note = 4.80 & Guinea note = $5.04. I just bought threepence apeny worth of peanuts with a £ not & got four half crown pieces 3 florins, 3 shillings one sixpence two pennys & a pence in change. It sure is some load. Am going to see whether I can get into transport driver tomorrow – Will close for present but will write again shortly.
Your loving son
Sheldon
(P.S.) are not allowed to write about trip at all