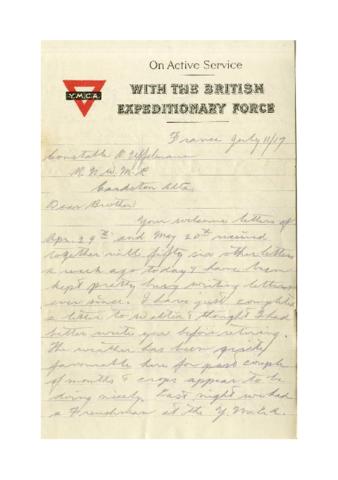 [Page 1]
Y.M.C.A. On Active Service With the British Expeditionary Force [Letterhead]
France July 11/17
Constable O. Uffelmann
R.N.W.M.P.
Cardston, Alta [Alberta]
Dear Brother:
Your welcome letters of Apr 29th and May 20th received together will fifty six other letters a week ago today + have been kept pretty busy writing letters ever since. I have just completed a letter to Walter + thought I had better write you before retiring. The weather has been quite favourable here for past couple of months + crops appear to be doing nicely. Last night we had a Frenchman at the Y.M.C.A.

[Page 2]
+ he gave us several fine reels of movies the firsts I have seen for about five months. I am still in hospital + am feeling quite well. Am taking two hot steam baths per day after which I have a cold shower a dip in cresol diluted in water + then apply flowers of Sudphin[?] which sure stings. I expect to be out of here within the next week or so + then expect to be sent back to the line unless they make me go through the bull ring again at the base. There is a concert at Y this evening but I thought I had better write letters instead. Received a line from Willie + he said things were just the same when I left + hoped I’d soon be back.

[Page 3]
I received the cigarettes + sure enjoyed them. I received seven letters from father + eight from mother + they seem to be well. Walter has asked them to come down to spend a week with him + I hope they will find time to get down as it will do them a lot of good to get away from home. The reports of war for past week has been very good + the general feeling of all the troops is that the war will be over this fall. I hope it will as I certainly am sick of the life + cannot wait until I can get back in my own clothes. It is not far off for my

[Page 4]
birthday + I wonder where I will be. Perhaps in trenches + perhaps here. Last year I was out for papa with the car. It will not be long before your time is up + I hope you will come home + help father as he certainly would be more satisfied if he had one of his boys at home. I hope Willie + I will be home by time you get home. Father certainly does miss me according to his letters + wishes I could be home to collect boxes this season. I often wonder how he is getting along with the work. I hope that he will be able to pull through this season. He seems to be having a great time with the car. He ran

[Page 5]
into the hedge fence + said he had quite a time to get out. I had quite a time trying to teach him to run the car but worst of it was he got excited to easily. Well Orley I really do not know what else to say as we write under difficulties here. All our mail is censored so cannot tell you what I would like to. However I hope to be back soon + so can tell you all. Will be pleased to hear from you again. Have not been able to hear any thing further about Lloyd.
Your loving brother
#751361 Sheldon
B.E.F. France 1st Can. Battn (Army Post Office)