11 Results for Science and technology

Fonds consists of the records pertaining to the activities of the Canadian Association for Women in Science (CAWIS) and includes CAWIS administration records, 1981-1992; CAFWEST records, 1983-1989; Task Force on the Status of Women Graduate Studen...

Canadian Association for Women in Science

The fonds consists of general correspondence of the Canadian Science and Technology Historical Association, 1980-1991, as well as material relating to the biennial Kingston conferences, including invitations, agendas, programmes, correspondence, f...

Faculty of Science – Office of the Dean fonds

The fonds contains administrative and curriculum records from the Office of the Dean, Faculty of Science. Included are the records of the Promoting Women in Science (PROWIS) conference for secondary school girls. 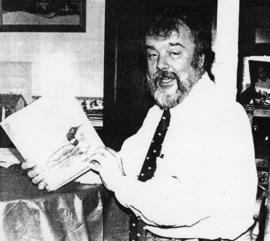 Fonds documents Martin Parker's work as the Regional Coordinator of the Parry Sound District for the second edition of the Atlas of the Breeding Birds of Ontario (also known as the Ontario Breeding Bird Atlas), an inventory of breeding bird s...

The fonds consists of administrative records, surveys, publications, training programs, reports, and other material created and acquired by the Research Centre for Management of Advanced Technology/Operations. It contains the following series: Kno...

Fonds includes reports and photographs pertaining to Susan Nealeís archaeological studies and career in the field of archaeology. The materials focus on Ontario, Nunavut, and England and include photographs and slides taken by Neale of Hambledon H...

The collection consists of photographic negatives and transparencies documenting various trade shows held at Exhibition Place and associated events held at other locations, such as publicity photo shoots and galas. Included are images of the Boat ...

Item is a photograph album dedicated to the televised landing of Apollo 11 on the moon, 1969. The photographs were taken by Wm. Enscott of his television screen, featuring the CBS feed of the moon landing, using a pin-hole camera he designed and ...