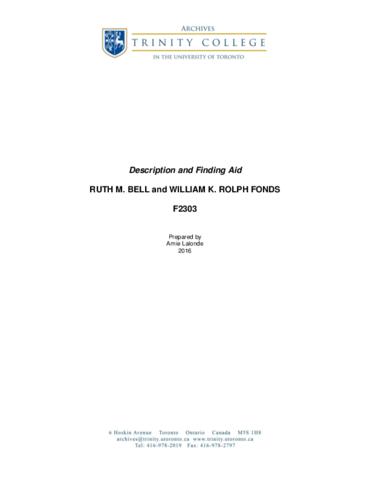 Bell was committed to advancing opportunities for women and was a founding member and first chair of UNESCO's Sub-Commission on the Status of Women and a member of a series of International Federation of University Women's committees as well as more than 50 other organizations including the Canadian Research Institute for the Advancement of Women, the National and Ottawa Council of Women, and the Social Sciences & Humanities Research Council. She acted as the Dean of Renison College, University of Waterloo, and a lecturer in political science at the University of Waterloo, Carleton University, St. Patrick's College, and Algonquin College. In 2004 she published her autobiography Be A “Nice” Girl!: a Woman’s Journey in the 20th Century. In 1981 she was awarded the Order of Canada and in 2005 was awarded the Governor General’s Award in Commemoration of the Persons Case for her work on behalf of women. Bell was also awarded the City of Nepean's Distinguished Citizen Award in 1982, a Doctor of Laws honoris causa from Carleton University in 1984, Queen Elizabeth's Golden Jubilee Medal in 2002, Scotiabank Lifetime Achievement Award in 2007, and Carleton University's highest non-academic award, the Founders Award in 2008. In 2009 she was awarded a Doctor of Sacred Letters honoris causa, by Trinity College.

Ruth Bell married William Kirby Rolph in 1945 and travelled with him to New York, New Orleans, and Canberra, Australia where he died in 1953..

In 1963 Ruth Rolph married Richard Bell (1913-1988), who served as the Progressive Conservative representative of Carleton County in the Canadian House of Commons from 1957 to 1963 and 1965 to 1968. He was also the Minister of Citizenship and Immigration under Prime Minister John Diefenbaker from 1962 to 1963. His daughter, Judy Miriam Bell, a distinguished lawyer and judge, became a dear friend of Ruth’s; she died 11 March 2000.

William K. Rolph was born in Toronto in 1917 to W. Frank and Maidie Rolph and studied history at Trinity College from 1936-1940, receiving a BA in 1940. (Rolph was the nephew of Dr Frederick Whitney Rolph who graduated from Trinity with his BA in 1901 and his MD, CM in 1905.) W.K. Rolph then attended Brown University where he received an MA in history in 1941 and a PhD in Canadian and American history in 1950. Rolph specialized in the study of agrarian movements and published Henry Wise Wood of Alberta through the University of Toronto Press in 1950. Rolph taught history at the University of Western Ontario, New York University, the University of Saskatchewan, and Tulane University before moving to Australia with his wife in 1952 to take a position as Research Fellow in the Department of Political Science at the Australian National University. While in Australia Rolph became ill and died suddenly on 23 December 1953.

Fonds has been arranged by the archivist