Fonds F2313 - Robert A. Spencer and the Atlantic Council of Canada fonds 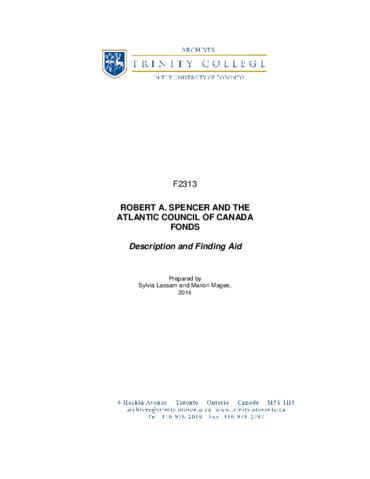 Robert Allan Spencer, historian, educator and administrator, was born in Montreal on 9 November 1920. Following his undergraduate degree from McGill (BA 1941), he served with the
Canadian Forces in Britain and Northwest Europe (1942-1946). After obtaining his MA in 1947 (University of Toronto) and his DPhil (St John's College, Oxford) in 1950, he joined the
Department of History at the University of Toronto. He held various administrative posts in the Department and in the University during his career culminating in his years as the director of the Centre for International Studies (1976-1986). Between 1959 and 1984 he was co-editor of International Journal. His main field of historical scholarship, German studies, led to active involvement in the Atlantic Brücke, the annual Canada-Germany symposium. The links he developed with the Federal Republic of Germany earned him the Goethe Medal and the Commander’s Cross of the Order of Merit. He wrote or edited works in the areas of German affairs and Canadian foreign policy. A founding member of the Atlantic Council of Canada, he served as Secretary, Secretary-Treasurer, Vice-President and President over the period from 1966 to 1990. In 1998 he was given an Honorary Fellowship by Trinity College. In 1948 Professor Spencer married Ruth Margaret Church. The couple had three children, Charles, Valerie Spencer Keyes and Katherine Spencer-Ross. Professor Spencer lives in Ottawa.

The Atlantic Council of Canada (ACC) developed out of the Canadian Atlantic Coordinating Committee (CACC) which was formed in 1954 under the leadership of Professor Edgar McInnis
of the Department of History, University of Toronto (later the first full-time president of the Canadian Institute of International Affairs - CIIA). In doing so he acted at the suggestion of the Secretary of State for External Affairs, Lester B. Pearson, his friend and former colleague, who had recognized that as the North Atlantic Treaty Organization (NATO) was to continue indefinitely it was necessary to provide public understanding of and support for it. The CACC brought together representatives of the CIIA and the United Nations Association (UNA). In 1966 it was succeeded by the Atlantic Council of Canada, which two years later was incorporated and continued this role.

Fonds consists mainly of files relating to both the administrative and public activities of the Atlantic Council of Canada during the years when Robert A. Spencer (RAS) was executive director of the Council. Also included are files relating to the ACC's involvement with the Canadian government, the North Atlantic Treaty Association, the Atlantic Treaty Association (ATA), the Committee on Atlantic Studies (CAS), and the Turkish Atlantic Council.

The fonds consists of records donated to the Archives by Robert A. Spencer in September 2010.

The files remain largely in the order received from the donor. In some cases several small files on the same subject have been collapsed and duplicates or extraneous material has been discarded.