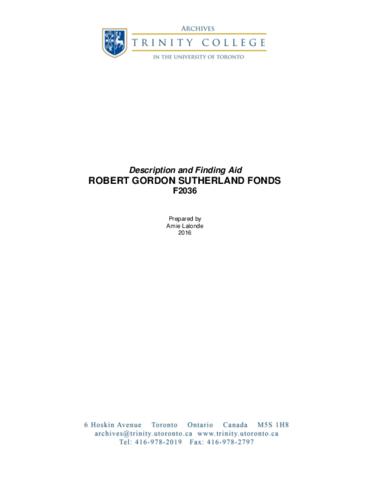 Sutherland was curate of Christ Church and All Saints Church in Hamilton from 1873 to 1876, became rector of St Mark's in Hamilton in 1877, was made a canon of Christ Church Cathedral in Hamilton in 1885, and was a sub-dean of the Diocese of Niagara. He was elected delegate to the Provincial Synod in 1886. He lectured widely on Shakespeare and according to the Trinity University Review, in its April-May 1913 issue, a course of lectures on Shakespeare's heroines he delivered at Trinity College on the Saturdays in Lent had the distinction of being almost, if not quite, the best money-making course that has ever been given.

The fonds consists of typescripts of a journal of a trip across Canada written sometime after 1898 and of six lectures on Shakespearean plays and heroines, as well as of newspaper clippings, correspondence, and printed items.

The fonds is described to the file level. Finding aid attached.