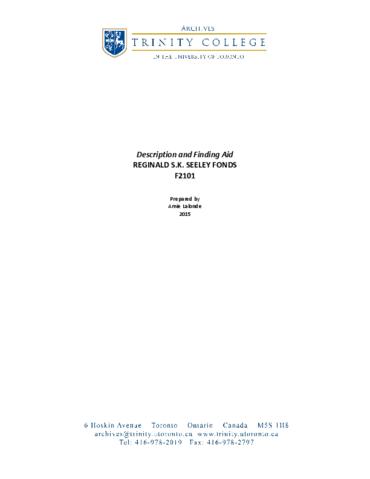 Reginald Sidney Kingsley Seeley, administrator, educator, theologian, and Provost of Trinity College, was born in 1908 in Herefordshire, England. He was the son of the Venerable George Henry Seeley, sometime Archdeacon of Rangoon. He attended Marlborough College and Christ's College, Cambridge. He took both parts of a Classical Tripos then studied theology at Ridley Hall, Cambridge, graduating with a B.A. in 1930 and an M.A. in 1934.

Seeley was appointed Provost and Vice-Chancellor of Trinity College, Toronto, in 1945. In 1952, Seeley oversaw the centenary celebration of Trinity College. His tenure also saw the construction of the chapel, which was consecrated in 1955, and a new residence house at the north-east side of the quadrangle. He was the liaison officer for the Colonial Service of Great Britain, vice-president of the Institute of Public Affairs, and the first president of the Classical Association of Canada. Seeley addressed the public through many radio broadcasts and was the author of The Sign of the Cross: A Meditation on the Place of the Cross in Human Living and The Function of the University.

Seeley married Marjory Peters on 30 July 1955 in St. John's Cathedral, Winnipeg. On 3 Aug 1957 he died from injuries sustained in a car accident in Trenton, Ontario.

The fonds consists of lectures, speeches (in person and on radio broadcasts), and sermons given by Seeley in his capacity as priest, religious leader, and provost. Files include programmes from services, events, and conferences, pamphlets written by Seeley, notebooks, and correspondence between Seeley and others. Fonds also includes letters received by Mrs. Seeley after her husband’s death, newspaper clippings and obituaries, official documents, photographs, and a printing plate.

The fond was received in one accession after Provost Seeley’s death.

Materials have been arranged by the archivist in chronological order within each series.