The fonds consists of photographic negatives featuring members of the Patteson family. Most of the photographs on the glass plate negatives were taken by Rose MacInnes (nee Patteson) and feature the Pattesons on their estate in Eastwood, Ontario (... 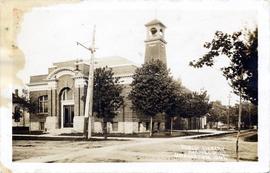 This series contains records that pertain to the renewal programs held in the summers of 1974, 1980 and 1981. The program included times of reflection, communal study and teaching presentations. This series includes photographs, a newspaper artic...

The sous-fonds consists of a variety of materials related to the Sisters of St. Joseph Concert Band, including photographs, various textual records, scrapbooks, audio cassettes, and compact discs.

This sous-contains fundraising documents pertaining to rural collections and the Orphans’ Festival which show that the Sisters needed support from the surrounding community in order to operate the orphanage. Articles, tickets, programmes, and rece...

This series contains documents relating to tertianship classes run in the 1950s and 1960s. There are programs, transcripts, a crucifix, booklets on religious scholarship, and photographs. Of particular interest is a history of the Congregation wi...