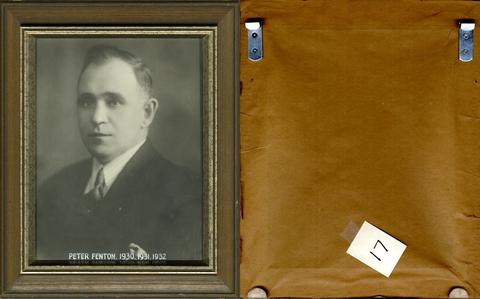 Peter Fenton was born May 12, 1885 to Peter Fenton (a Domestic Gardener) and Isabella Wilson in Dunfermline, Scotland (County of Fife). He immigrated in 1906 to Canada, arriving on April 4, 1906 in Halifax via the ship "Mongolian," and traveling to Toronto, Ontario. He lived in Toronto and Hamilton but decided to move to Sudbury around 1907. Fenton returned to Scotland to marry Jenny Williamson Gibson (a Weaver) in Dunfermline on January 28, 1909. The couple then went out west, living in Alberta for a brief time. After returning to Sudbury, Fenton worked as a joiner, a building contractor, an insurance adjuster, and a politician. Peter Fenton passed away on October 5, 1953 in Sudbury, Ontario.