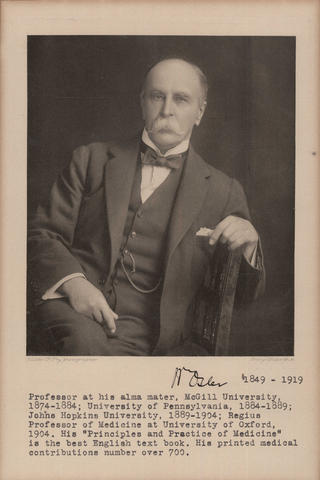 Osler Society of the University of Western Ontario

During the early 1900s meetings devoted to medical history were held in the Medical School. This is believed to be the roots of the Medical Historical Society. In 1914 a paper read by Dr. H.O. Foucar stirred the interest of the medical students and prompted additional meetings of the Medical Historical Society. The earliest records from these meetings date to 1921. In 1921 members of the Society began documenting the meetings and electing officers. Membership was open to undergraduates, graduates and members of the medical faculty. In 1921 two memorable papers were delivered: one by Dr. F.G. Banting and the second by Professor J.J.R. Macleod. Both of these papers prompted the idea of a more permanent historical society which in turn became the Osler Society. The 3 founding members of the Osler Society are considered to be Dr. W.D.M. Lloyd, Dr. J.W. Crane, and junior medical student E.A. Bartram. During Dr. Lloyd’s term as Demonstrator in Pharmacology he made frequent references to Sir William Osler. In early 1927, Dr. Crane suggested that a historical society devoted to medical history be formed on a more permanent basis. Lady Osler’s permission was sought to name this club either the Osler Society or the Osler Club. The Osler Society’s membership included honourary and active members as well as alumni of the Medical School. Papers were presented before the membership with a focus on historical topics such as the history of Canadian medicine. An annual banquet was held which included the Annual Osler Oration, delivered by the Honourary President on some aspect of Sir Osler’s life. Keys and scrolls were given to new members. New members were recruited through the early part of 1927 so that on May 14, 1927 there were enough members to elect the first executive. The first banquet was held in October 1927 during which Dr. Lloyd gave the oration on “The Life of Osler.” The year 1941 brought the first significant changes to the Osler Society because it was the first year since inception that no Honourary President was appointed and no banquet was held. The Society had withstood the great depression but could not stand the impact of the war. The last meeting was held on October 6, 1942 at the Ontario Hospital. As the Osler Society was being disbanded a new organization, the Alpha Omega Alpha Honour Society was starting up. Many members of the Osler Society joined this new Society. The Osler Society was revived on November 3, 1948 when under the auspices of the Hippocratic Council a committee was appointed to start a new Osler Society. Dr. Crane was present at this meeting and he stressed the importance of the history of medicine and the value derived from preparing and presenting an original paper. On December 9, 1948 a new constitution was approved and adopted. Its aims and objectives were to perpetuate the memory of Sir William Osler, to further the study of medical history and to provide members with training in the preparation and presentation of papers. Membership was open to all interested students and members of the medical faculty. The society was now called “The Osler Society of the University of Western Ontario.” Instead of giving keys and scrolls to the new members (as had been done in the past) they were now presented at the annual banquet to Society members in good standing in the graduating class. In January 1949 the first “Bulletin of the Osler Society” was published. Once again the Osler Society faced difficulties until its 2nd revival in the late 1980s by Dr. Paul Potter.

These records were in the custody of The University of Western Ontario Faculty of Medicine Library.

The records were transferred to The University of Western Ontario Archives. The date of the transfer is not known.

Some related information can be found in the History of Medicine Virtual Exhibit: http://www.lib.uwo.ca/archives/virtualexhibits/historyofmedicine/Home/home.html