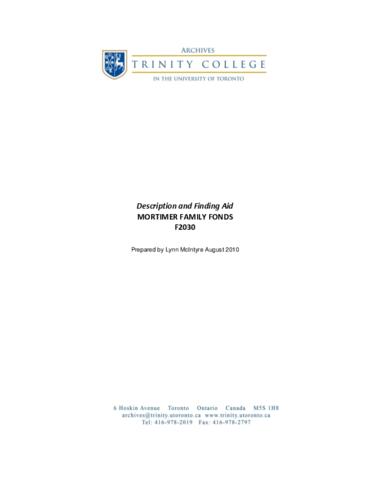 Charles White Mortimer, lawyer, was born on 20 April 1852 in Adelaide, Ontario, and died in 1920. He was the son of the Reverend Arthur Mortimer and was educated at Upper Canada College and at Trinity College, Toronto, receiving a B.A. in 1875 and an M.A. in 1887. He became a lawyer in California in 1883 and was made British vice-consul at Los Angeles the same year. There is a memorial tablet, dedicated in 1923, to his memory in the Trinity College Chapel. He married Annie Marie Griffin and they had two sons, Charles Gordon and Arthur Beresford, who both served in the First World War. Charles Gordon Mortimer, barrister-at-law and soldier, was born in 1890 in Los Angeles, California, and died on 21 October 1916 in action at Malta. He was a cadet of the Royal Military College, in Kingston, Ontario, and became a lawyer. He was a lieutenant in the Royal Field Artillery; he is commemorated at the Pieta Military Cemetery, Malta. Arthur Beresford Mortimer, lawyer and soldier, was born on 13 May 1889 in Los Angeles and died in 1956. He attended Trinity College School, Port Hope, Ontario, and Trinity College, obtaining a B.A. in 1911. He was at Oriel College, Oxford, from 1911 to 1913 and returned to Canada to attend Osgoode Hall Law School. He served in the First World War from 1915 to 1919 as a captain in the Canadian Artillery. On 28 December 1916 he married Flora MacIvor, and they had five children: Phoebe, Elizabeth, Charles Stewart, Grania, and Maureen. He was called to the bar of Ontario in 1919 and was created a King's Counsel in 1945. He practised with Ross & Holmstead and Manning, Mortimer & Kennedy. Charles Stewart MacIvor Mortimer, lawyer, Anglican clergyman, and soldier, saw service during the Second World War and then attended Trinity College, Toronto, obtaining his B.A. in 1948. He returned to Trinity College, to sudy in the Faculty of Divinity in the early 1990s and obtained a B.D.

Charles Stewart MacIvor Mortimer, son of Arthur Beresford Mortimer and a Trinity alumnus, donated the records to Trinity College in 1992.

A memorial tablet, dedicated in 1923, to the memory of Charles White Mortimer, is in the Trinity College Chapel.