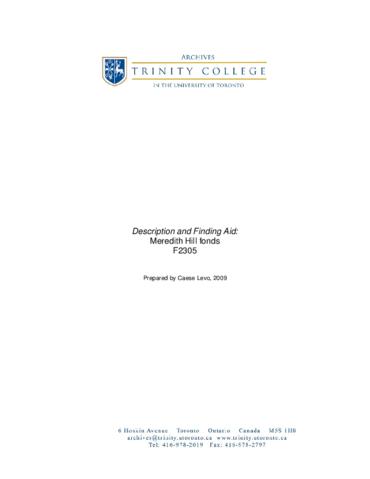 Meredith Hill is a retired high school teacher and Anglican priest. She was born in 1945 in Toronto, the daughter of Dr. Roland Hill and Nancy Meredith Clark. She attended Havergal College, Huron College at the University of Western Ontario, the Faculty of Education at the University of Toronto, and Trinity College from 1981 to 1987 where she received her M.Div. She was deaconed in January 1990, priested in January 1991 and briefly served the parishes of St. John’s Norway and St. Stephen’s Downsview. She returned to teaching, first with the Toronto District School Board, and then with the Kawartha Pine Ridge District School Board.

Meredith Hill lives in Peterborough, Ontario with Eleanor Low, her partner since 1992 and her married spouse since 2003. She has two sons, David Robert Hoare and Andrew Graydon Hoare.

Fonds consists of research files created and used by Meredith Hill while executing her part of the 'Divinity 150' project at Trinity College. This project was begun in 1987 to study the Anglican clergy, in particular their training at the Cobourg Theological Institute and its successor, the Faculty of Divinity at Trinity College. Her research focused on the women who studied Divinity at Trinity College from 1915 to 1987. Fonds contains research obtained from records in the Trinity College Archives, and from surveys answered by former students. The fonds also contains a paper and course materials by Alison Kemper, a published paper by Meredith Hill as well as her presentation to the Divinity 150 Colloquium.

Fonds was donated by Meredith Hill in 2008.

None. Researchers may be asked to sign a research agreement.