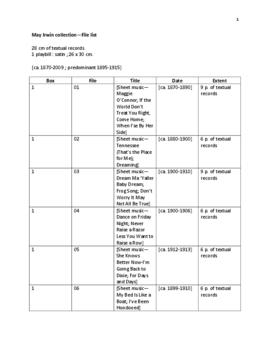 May Irwin (born Georgina May Campbell) was a Canadian singer, songwriter, and comic performer who enjoyed popularity and prestige from the late 1890s until the end of the 1910s on the American stage (Brooks 8). Key to Irwin’s popularity was her role as a “coon-shouter” and a performer of “coon songs,” deeply racist forms that emerge from minstrel musical traditions and blackface performances. Irwin’s considerable success was achieved via her reproduction of hate speech—speech which contributed to the oppression and death of many black persons in North America.

Section 2: What is minstrel music? What is blackface?

Minstrel music was a racist form of popular music in North America in the 1800s. Minstrel music continues to be performed in the twenty-first century, though its language is often altered to disguise its origins (Wheeler 57).

A key goal of minstrel music was the creation and reinforcement of stereotypes about black persons with the goal of legitimizing white supremacy and white dominance, particularly following the abolishment of slavery in America. Maurice B. Wheeler describes the themes of minstrel music as follows: “The shared belief that blacks were inferior to whites, and incapable of moving beyond their current social status, regardless of the institution of slavery [. . .] [black people] were portrayed as lazy, childlike in intellect, shiftless, and sexually deviant. They were incapable of learning or speaking English properly” (52). Minstrel music in the Reconstruction Era intended to reassure white society that black people could not successfully be integrated into American [and Canadian] society and, thus, that white dominance was natural and proper. Minstrel music intensified its virulence toward black people after the Civil War, in an era when white society felt it was losing control of the black population (Wheeler 52-55).

Minstrelsy was the dominant popular entertainment in America and in Canada from the 1840s to 1870s. Minstrel performers often darkened their skin artificially in an attempt to offensively impersonate black people, a practice known as blackface. Hundreds of professional minstrel troupes performed in blackface during this period. American minstrel troupes frequently travelled through Canada, and Canada also had its own minstrel troupes. Blackface was a favourite form of Canadian entertainment for local amateurs at fundraisers for schools, police forces, community groups, churches, and charitable organizations. The writer of the Canadian National Anthem, Calixa Lavallée, often performed as a blackface minstrel (Howard). In the United States, minstrel performances were enjoyed by several U.S. presidents, including President Tyler (1844) and Abraham Lincoln (1860) (Wheeler 56).

Section 3: What are “coon songs”? What is “coon shouting”?

Following the American Civil War, economic depression reduced the number of professional minstrel troupes in existence. Amateur minstrelsy exploded instead, resulting in the creation of the “coon song” (Wheeler 54).

Wheeler writes that in early minstrel music, the term “coon” was used to refer to raccoon meat, which was purportedly preferred by black slaves (55). The term quickly became a racist epithet for black people themselves, part of a longstanding tradition of linking black people with animals in order to belittle their intelligence and justify white domination (50). “Coon shouters” were performers, usually white women, who shouted loudly during performances in order to be heard by all in the audience. In the late 1800s, many lyricists, composers, publishers, and performers contributed to this genre (Wheeler 55-56).

Brooks argues that white women comics in this period were key to the expansion of the “coon song” genre. Hampered by Victorian ideals of womanhood and systematically excluded from the stage, white women could gain legitimacy as comic professionals by participating in blackface minstrelsy (11). “Coon songs” tended to recount stories of troubled courtships between black men and women, in which the wrongs experienced by the “black coon” were linked to the fundamental “wrongness” of his skin colour (12). The comedic impact of coon shouting relied upon the contrast between the white woman performer, who “blacked up” her voice but not her face, and the black man she was attempting to impersonate (12). The “coon” as performed by white women was always a signifier of comic ridicule and served as “evidence” of the superiority of whiteness, particularly white female gentility (3).

May Irwin was a prominent figure in American popular music, aiding in a transition toward minstrel music overlaid with the syncopated rhythms of ragtime (10). Irwin must be remembered as someone who accrued considerable social and economic capital by reproducing hate speech that contributed to the marginalization and death of many black persons in North America.

Section 4: Life of May Irwin

May Irwin was born Georgina May Campbell in Whitby, Ontario in 1862. Irwin was the child of Robert Campbell and Jane Draper Campbell. She had four elder siblings: Adeline Flora, Albert, Frank, and Chester. Irwin’s father died in 1874. In the following year, Irwin moved with her mother and sister to America (Ammen 189-190).

In 1875, Irwin and her sister began performing in vaudeville shows under Daniel Shelby’s tutelage in New York. By 1887, Irwin began performing under the tutelage of Tony Pastor, a vaudeville figure who actively cultivated a “middle-class female audience.” Irwin and her sister would go on to perform in the “big time” touring circuit across America under the stage names “May Irwin” and “Flora Irwin” (Ammen 190).

Between 1878 and 1881, Irwin married Frederick Keller and gave birth to two sons, Walter and Harry (Ammen 190). In 1883, Irwin began to work with Augustin Daly, a theatrical manager and creator of stage melodramas who helped her gain entry into New York’s theater world (Brooks 8). Irwin began to sing and compose many “coon songs” and “plantation lullabies” during this period, including “Mamie, Come Kiss Your Honey Boy” and “My Baby I’ll Go To.” Brooks writes, “Like other famous coon-shouters, [Irwin’s] conventional feminine, even fashionable evening dresses contrasted sharply with her musical renditions of “coon” masculinity. She integrated the comic haplessness of the “coon” into her own idiosyncratic style of comedic performance” (10).

In 1895, Irwin’s reputation as North America’s foremost “coon shouter” was cemented by her hit rendition of Charles E. Trevathan’s song “The New Bully.” In this chilling song, two black men vie for the title of “biggest bully in town.” The song’s conclusion features the following lines: “When I got through with bully, a doctor and a nurse / Wa’nt no good to dat nr, so they put him in a hearse , / A cyclone couldn’t have tore him up much worse / You don’t hear ‘bout dat nr dat treated folks so free / Go down upon the levee, and his face you’ll never see / Dere’s only one boss bully, and dat one is me” (May Irwin collection, box 2, file 2). The song serves two functions: first, it provides a rationale for anti-black violence, reinscribing stereotypes of animalistic black men who if left unchecked will disrupt social order; second, it enacts a form of symbolic violence meant to incite actual violence against black persons. The racist logic operative in this song is the same logic undergirding redlining, lynching, and other actions aimed at the obliteration of black people. Irwin’s participation in this tradition is unconscionable.

Irwin subsequently began to overlay ragtime songs with the racist lyrics of the minstrel musical tradition (Brooks 8-9). In the following years, Irwin achieved greater control over her music through the formation of her own company. She selected and promoted the best-written “plantation lullabies” and “coon songs,” including “When You Ain’t Got No Money, Then You Needn’t Come Around” and “The Frog Song.” Irwin would continue playing comic theatrical roles as well, including roles in The Widow Jones and Mrs. Black Is Back. She performed for President Roosevelt in the early twentieth century, a testament to the centrality of anti-black racism in the public sphere.

Irwin married and divorced several times throughout her adult life. She owned land in Thousand Islands (“Irwin Island”) and Clayton (“Rainbow’s End”). In 1935, she performed “Frog Song” to a crowd of 10,000 in Central Park in honour of the 100th anniversary of Mark Twain’s birthday (Ammen 191-192). Mark Twain was a prominent fan of minstrel music. Wheeler quotes him as recording, “If I could have the n****r show back again in its pristine purity and perfection I should have but little further use for opera” (52).

In 1938, Irwin died of bronchial pneumonia in New York City (Ammen 192). In the years following her death, some have tried to reclaim her legacy, writing of her proto-feminism (as evinced by her participation in a suffragette parade in 1916) or her importance to particular regions (Whitby, Ontario). If such legacies do not reckon with Irwin’s participation in virulent and deplorable racism, and if they instead seek to enshrine Irwin as an inspirational figure, they contribute to white supremacist ideology.

Section 5: A Note from the Archives

These records have been accumulated over a period of 25 years from a variety of sources. Individual items were transferred to Archives at Whitby Public Library infrequently and only when they became available to collectors. Some records were obtained through eBay.ca and inter-personal relationships.

The collection consists of a variety of material relating to the professional and private lives of May Irwin and her sister Flora. As one of North America’s foremost “coon shouters,” May Irwin engaged in and benefited from the deeply racist traditions of minstrel music and blackface performance in the nineteenth and twentieth centuries. Irwin’s musical records constitute hate speech.

Records were acquired from a range of Whitby citizens and Archives staff from the mid-1980s to 2012.

An order was supplied by the archivist to increase ease of use.

Copyright for many records has expired. Where copyright still exists, materials cannot be published without permission from the copyright holder.

Description created in April 2012 and updated in February 2018.