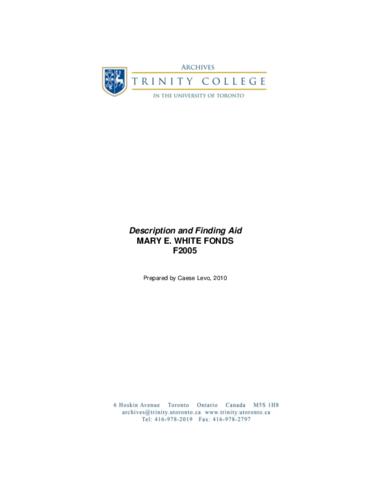 Mary Estelle White, educator, was born in 1908 in Grafton, Ontario and died on 7 January 1977. She studied at Queen's University, Kingston, and Oxford, where she obtained an M.A. After teaching at McMaster University, Hamilton, from 1937 to 1940, she was appointed lecturer in classics at Trinity College, Toronto. She was promoted to associate professor in 1945 and became Worrell Professor in 1963. From 1946 to 1964 she was editor of the journal "Phoenix" and she was the author of numerous studies in Greek history. She was head of the Department of Classics at Trinity in 1965-1966 and was acting head in 1971-1972. She also held the position of head of the Graduate Department of Classical Studies at the University of Toronto from 1966 to 1971. She became a fellow of the Royal Society of Canada in 1972. White retired from Trinity College in 1974.

The fonds includes five series. Series one consists of correspondence files of organizations Mary E. White was involved with, in particular the American School of Classical Studies at Athens and the Classical Association of Canada, and of general correspondence. Series two consists of files of writings, speeches, talks, and lectures by Professor White, including an unpublished manuscript of a book on the Peisistratidai and a University of Toronto Convocation address to honour courses in the humanities. Series three consists of examination papers, mainly from Trinity College, Oxford, and Newnham College, Oxford, for the period 1873-1894. Series four consists of files of reading and lecture notes in Greek and Roman history. Series five consists of papers and off-prints of works by other people, probably in large part manuscripts received for publication in "Phoenix."

The fonds is described to the file level. Finding aid attached.