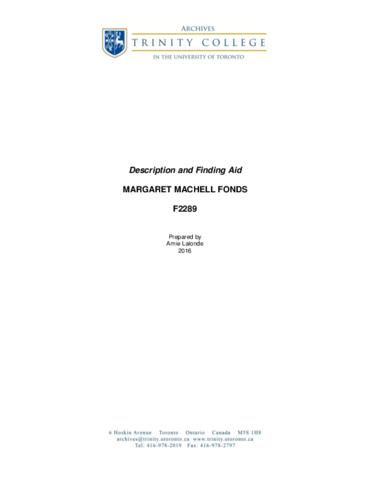 Margaret Schuyler Machell was born about 1919 to Herbert Eric Machell and Kathleen Murray Alexander in Toronto, Ontario. She attended Bishop Strachan School until 1937 and worked as a switchboard operator at the Art Gallery of Ontario (AGO) in the late 1930s. Machell joined the gal-lery staff in 1941 and worked as membership and education secretary, co-ordinator of activity, and in volunteer activity. In 1970 she was appointed custodian of the Grange House Museum and archivist of the AGO. She was also the founder and president of the Ontario Museums Associa-tion and served as Ontario governor for the Northeast Conference of the American Association of Museums. She retired from the AGO in 1984 and was awarded the Ontario Museum Association Award of Excellence in 1986.

The fonds consists of records relating to the Larkin-Stuart Lecture on church furnishings, deliv-ered on 14 November 1978 including drafts, research materials and slides.

Files received from Margaret Machell in 2005.

Original order has been preserved.

Various copyright holders. Researchers must obtain permission to publish any part of the fonds.