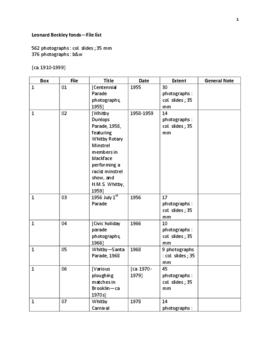 Leonard Beckley was born in Bude, Cornwall, England in 1905. In 1910, he immigrated to Canada with his parents, Richard and Jane, and his brothers Herbert, Victor, and Edgar. Beckley’s family moved to 509 Beech Street East, Whitby, Ontario in roughly 1916. Beckley married Elizabeth Ellen Roberts (1901-1984); the couple lived at 609 Pine Street, also in Whitby. They did not have children.

Beckley was employed as a janitor and labourer. In his spare time, he was an avid photographer, capturing many images of flowers, landscapes, Whitby events, and his vacations. He was also an enthusiastic gardener; his photographs often feature his “Old English” garden.

Records were transferred to Archives at Whitby Public Library at an unknown date prior to 2013, by an unknown custodian.

The fonds consists of photographs of Whitby taken by Leonard Beckley in his late adulthood (1950-1999), as well as photographs of Beckley’s family of origin in the early years of their settlement in Whitby at 509 Beech Street East (1910-1930). Photographs taken by Leonard depict his garden, nature scenes, and events in the town. Photographs in the latter category provide evidence of racist public activities in Whitby, including the following: the existence of the Whitby Rotary Minstrels, whose members put on minstrel shows while in blackface (photographs date into the 1950s); various town parade participants in redface and blackface; and a parade participant who is likely dressed in a Ku Klux Klan outfit.

Photographs are arranged in files.

The archivist maintained the order of discrete sets of records wherever it was found, both physically and in the finding aid. In the absence of identifiable order, the archivist supplied an order to increase ease of use.

The majority of records in the fonds are protected by copyright until 2053. Permission to reproduce copyrighted materials must be obtained from the copyright holder(s). See archivist for details.

For more resources that confront and challenge blackface and minstrel performances in a Canadian context, see the following:

For more resources that confront and challenge redface, see the following: