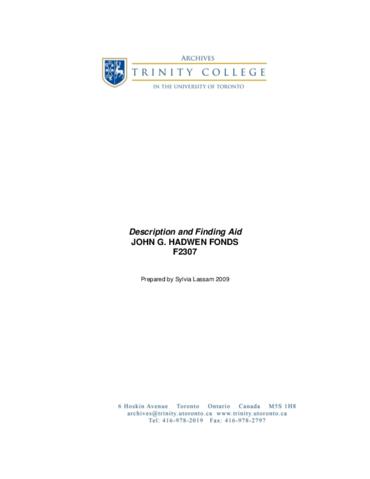 John Gaylard Hadwen was born in Toronto in 1923, the son of Dr Seymour and Estelle Alden Hadwen. He was educated at the University of Toronto Schools, Trinity College, the London School of Economics, and the Universitaire des Hautes Etudes Internationales. (Geneva). He joined the Department of External Affairs in 1950, and served in Pakistan, New York, Oslo and Ottawa. He was High Commissioner to Malaysia and Singapore and Ambassador to Burma 1967-71, Ambassador to Pakistan and Afghanistan 1972-74, High Commissioner to India and Ambassador to Nepal 1979-83, Director General of the East Asia Bureau 1983-85 and Director General of the Bureau for Security Services, 1986-86. He also served as assistant to Lester B. Pearson and to Paul Martin Sr. He was the author of numerous essays and articles and completed a book-length manuscript, unpublished, on the Colombo Plan.
John Hadwen was married to the former Shirley Vivyan Brown and had four sons, Timothy, Peter, Matthew, and Anthony. He died in 2007.

Fonds was donated in two stages. Series 1 was given to the Trinity College Library by John Hadwen in 2001. The remainder of the material, now comprising Series 2 and 3, was donated to the archives by Timothy Hadwen in 2009

A detailed description and finding aid is available at the file level; see: http://www.trinity.utoronto.ca/trincms/ckeditor/ckfinder/userfiles/files/Library%20%26%20Archives/Archival%20fonds%20lists/HADWEN%20F2307.pdf