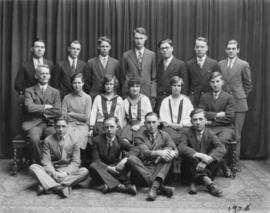 John Douglas Arnup was born on May 24, 1911 in Toronto, Ontario. The eldest of six children, Arnup was raised in Toronto and lived there throughout his life. He attended Victoria College at the University of Toronto from 1928 to 1932, and graduated with a Bachelor of Arts degree in English and History. He enrolled at Osgoode Hall Law School in 1932, and was called to the Bar in 1935. Arnup was elected a bencher of the Law Society of Upper Canada on May 15, 1952, and elected Treasurer in 1963. He held the position of Treasurer until 1966. He was appointed a justice of the Ontario Court of Appeal on April 17, 1970 and served until his retirement in October of 1985. Arnup also served as a member of the Senate of the University of Toronto (1945-1950) and the Board of Regents at Victoria University (1960-1970). He was a member of the council of the Canadian Bar Association from 1946 to 1949 and 1960 to 1970. He was president of the Lawyer's Club from 1949 to 1950, and served as chairman of the Law Society Foundation from 1968 to 1970. He was a member of the County of York Legal Aid Committee (1967-1970) and was a founding director of the Advocates' Society. Arnup is the author of the book, "Middleton: The Beloved Judge" (Osgoode Society, 1988). Arnup has received honourary degrees from Queen's University (1967), York University (1969), Victoria University (1976), and the Law Society of Upper Canada (1984). He was appointed an Officer of the Order of Canada in 1989. Arnup died in Toronto on October 5, 2005.

Fonds consists of speeches, photographs, correspondence, memoirs and other material relating to the personal life and legal career of John D. Arnup in his role as a lawyer, judge, and bencher of the Law Society of Upper Canada. The fonds also contains biographical material about D. Park Jamieson and Joseph Sedgwick, and items relating to the life of Carol Arnup (daughter of John D. Arnup). Fonds is comprised of the following series: biographical material, photographs, speeches and related material, correspondence, Carol Arnup material, and memoirs.

Records in the fonds were donated to the Law Society of Upper Canada Archives by John D. Arnup in a series of accessions between 1989 and 2004.

A finding aid is available.