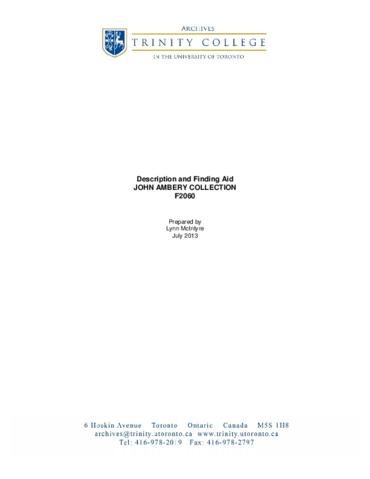 John Ambery, academic, was born in April 1828 in Manchester, England, and died in 1878 in England. He attended the Manchester Grammar School and Brasenose College, Oxford. Upon graduation, he was appointed Professor of Classics in St. Andrew's College, Bradford, England. In 1856 John Ambery left England and was appointed Lecturer in Classics at Trinity College, Toronto. Two years later he moved to the Toronto Grammar School as classical master. He also held the position of Inspector of Grammar Schools and was a member of the Council of Education. Ambery returned to Trinity in 1863, holding the dual post of Professor of Classics and Dean of Residence until 1875, when he was compelled by ill health to resign.

In 1858 he married Henrietta Frederick Foster, youngest daughter of Colonel Colley Lyons Lucas Foster. They had four children: Ellen Marian, Charles Clayton, Edward Foster, and John Willis. In 1876 he was appointed to the Chair of Classics at Bishops College, Lennoxville, Quebec, In 1878 he returned to England.

The fonds appears to have passed from the possession of Guy E. Whittaker to the College Librarian before being passed to the Archives at an unknown date. The poem was received from the ROM's Canadiana department.

The fonds consists of a letter book and an itemized list of the contents of that letter book. A significant portion of the correspondence is in regard to a letter published in The Globe on 2 February 1875. The fonds also includes a poem titled "College Vagaries."