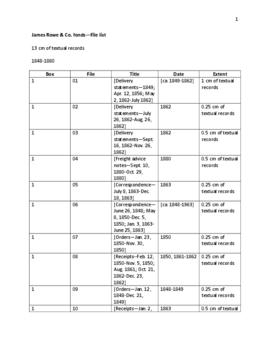 James Rowe & Co. was founded in 1849 by James Rowe, John Welsh, and John Watson. The company operated warehouses at Port Whitby and specialized in the shipment of commodities—particularly wheat, flour, barley, peas, potash, oatmeal, and lumber—to Canadian and American ports via Lake Ontario. Goods were transported to the harbour at Whitby via the Midland Railway of Canada and other Great Lakes vessels. Additionally, James Rowe & Co. imported products to sell in the stores of Whitby and significant quantities of limestone for local construction projects.

James Rowe & Co. was the major shipping company at Port Whitby for many years. The organization was managed by John Watson in its early decades. Following the deaths of John Welsh and James Rowe in 1859 and 1869, Watson purchased the company’s warehouses and continued operations alongside his son, John Allingham Watson. John Watson died in 1879, after which point his son operated James Rowe & Co. until his own death in 1913.

By the beginning of the Second World War, the grain trade on Lake Ontario had effectively ended as a result of U.S. tariffs on Canadian grain. In 1929, the buildings of James Rowe & Co. were demolished by Randolph Macdonald Company to make way for a new shipyard at Port Whitby.

The fonds was acquired by the Archives of Ontario in 1967 from Upper Canada Village. In 2015, the fonds was repatriated by Archives at Whitby Public Library.

The fonds consists of the operational records of James Rowe & Co., particularly records relating to the shipment and receipt of commodities in the company’s early decades.

The fonds is arranged in files. Documentary forms include correspondence related to business operations; receipts given by the company at the time goods were deposited; orders, which are often accompanied by receipts; delivery statements giving an inventory of goods transported by various Great Lakes vessels to James Rowe & Co.; and freight advice notes, which announce the delivery of goods at the Whitby Station by rail.

The majority of records are in poor condition.

Some records require flattening via steam to ensure long-term preservation.