Fonds consists of records created or collected by members of the prominent Gordon family of Port Credit during the course of their personal and professional lives.

While the records span three generations of the Gordon family, the fonds centres on the personal and professional records of George W. Gordon. His records, as well as smaller bodies of records created by four of his children, Lillian, Rhena, Francis (Frank), and Douglas Wilden, came into the care of his granddaughter, Sandra (Gordon) Moore who partially organized them and conducted related family research. Moore’s own records and those of her ancestors have therefore been treated as an organic whole and no attempt has been made to split the body of records into separate fonds; however, series are described in terms of the family member to whom records pertain (see below for series listing).

George W. Gordon’s records include a substantial number of letters dating from the late nineteenth and early twentieth century from members of the Wingfield, Beamish, and Gordon family members and acquaintances, relating to daily life in small Ontario settler and farming communities such as Utterson, Allensville, Port Credit, Springfield-on-the-Credit (now Erindale) as well as larger centres such as Hamilton and Toronto. Some letters came from further afield in the North West Territories, England, and the US. Domestic and personal records collected or created by Gordon also include administrative records related to fraternal organizations (Masonic and Orange Lodges), household receipts, farming expense accounts and diaries, land and financial records, and various ephemera.

The fonds also contains a significant body of records emanating from George W. Gordon’s role as justice of the peace and magistrate for Port Credit, including marriage licence applications, administrative records related to the Toronto Hamilton Highway Commission, and police court records. The latter include completed forms such as summons, warrants, and complaints, correspondence and signed statements made in court relating to criminal charges and civil infractions.

Records created by Gordon’s children, Lillian, Rhena, Frank, and Douglas Wilden include correspondence, photographs, ephemera, family research, and professional records related to teaching. Lillian Gordon’s records include a significant amount of mid-twentieth-century correspondence with suitors located in Ontario, the US and Germany.

Sandra Moore’s records contain a substantial amount of family research, including correspondence with relatives and records offices in North American and the United Kingdom. Her records include extensive documentation of the Beamish family of which one branch settled in Springfield-on-the-Credit.

Palgrave: The United Church and the Community collection

Collection consists of records used in the writing of "Palgrave: The United Church and the Community", a local history book published by the Palgrave United Church in 1978 and revised in 2005. The first edition was written by Florence McLean with George A. Mundy. The collection includes research material photocopied or retyped from a variety of sources, drafts of the book sorted by chapter, as well as paste-ups and an unbound typeset copy, and correspondence.

Parte dePalgrave: The United Church and the Community collection

File consists of a single piece of paper, detailing the 2005 book launch. 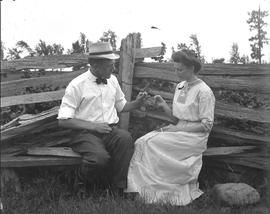 Fonds consists of graphic and textual records created and collected by Robertson Matthews as well as other family members. The fonds has been arranged in series determined by subject and form of record. Series include photographs, correspondence, diaries, engineering records, literary records, personal records, Matthews family legal records and Matthew H. Matthews records.