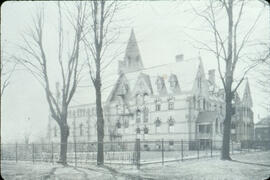 Series contains correspondence, deeds, photographs, and newspaper articles about Mount Hope Motherhouse in London, Ontario before its purchase and while it was operating. Earliest records include a report card from 1868, a letter dated 1869, and an original deed of land dated 1883. Records from the late 1920s to 1960s include original newsclippings. Many of the records are undated photographs, photocopies, or typed histories and biographies. The latest record dated 2005 is email correspondence. 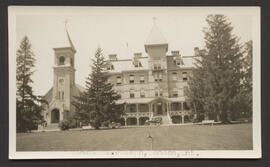 This series contains correspondence, journal articles, historical reports, newspaper clippings, prayer cards, sermons, photographs, administrative reports, meeting minutes, speeches and one map relating to the commissions of the Sisters of St. Joseph within the Diocese of London. The series also contains biographical information on Bishop Michael Fallon, including a biography and eulogy, as well as articles related to the Bilingual Controversy that the Bishop was involved in. The series contains reports made by the Mission Commission related to the administration and operation of missions that the Diocese were engaging in from 1971 to 1979. Also included are textual materials related to Sister Flynn and Sister Carmel’s missionary visit to Labrador from February 1974. Administrative records reflect the participation of CSJ London in the Second Synod of the Diocese of London in 1966-1969.