Series consists of plans regarding the Canadian Northern Railway Station property and its redevelopment, 1984.

File consists of nine (9) legal documents (and newspaper clippings) relating to the restoration of the Port Hope CN Station, 1984. It includes: (1) Agreement between ACO and Alan Zeegen Associates Ltd. (Engineers) 18 April 1984; (2) Inspection Report CN Rails Station. February 1982; (3) CN Railway Station, Port Hope Ontario by Martin E. Eaver, Director of Education & Technical Services, Heritage Canada Foundation Conservation Study, July 5, 1982; (4) Stipulated price contact, 1984; (5) Agreement between CNR Company and Ontario Heritage Foundation and ACO, March 1983; (6) Agreement between the Canadian Railway Company and Her Majesty the Queen in Right of Ontario as represented by the Minister of Culture and Citizenship and the ACO re: $180,000 between the 3 parties; (7) Document regarding the transfer of land between CNR and ACO, 1987; (8) Railway information kit for aid in the conservation of Heritage Railway Stations; (9) Newspaper articles concerning the reopening of the Station.

Item consists of a postcard called a "Super Natural Post Card" on verso.

Parte de Palgrave: The United Church and the Community collection

File consists of draft manuscripts on the topic.

Cargo book of Schooner Wanderer (initially belonging to the Port of Toronto, James Jackman Master; James Henry Jackman, owner), 1873 – [1882?] including Log Book commencing in 1883 with change of ownership to Captain John Spence of Southampton, Ontario. The ship's log, commencing in or around 1883 until 1887, records information about the weather and the ship's travels This includes records of travel on Lake Huron in the County of Bruce with references to Pike Bay, Point Clark, Port Elgin, Kincardine, and Saugeen. References to other ships include the Schooner Nemesis. Examples of goods shipped included wheat, peas, stone, barley, coal, lumber, bark, and salt.

Fonds consists of the papers created throughout the process of renovating the old Canadian National Railway station in Port Hope, c1977-1986. The project was supervised by the Architectural Conservancy of Ontario, Port Hope Branch. Please refer to series-level descriptions for more detailed information.

File consists of correspondence related to the "CNR Construction Project" for the renovation of the Canadian Northern Railway station building located on Hope Street, Port Hope.

File consists of the documentation related to the restoration of the Canadian Northern Railway station, Hope Street, Port Hope. It contains mostly correspondence and legal documents.

File consists of clippings regarding the renovation of the Canadian National Railway station in Port Hope, from the Port Hope Evening Guide and an agreement on plans for the restoration of the station.

Item is a painting by Canadian actor and artist Robert Imbert Orchard (1909-1991). Oil, unframed painting. Written on verso: "Painted by Robert Imbert Orchard when a student in J. W. Beatty's class at Corbett's Mill, Port Hope. The "Julia B. Merrill" ship painted in Port Hope harbour 1928. She was afterwards burnt at Sunnyside August 1931 to amuse the public. One of the last lake schooners had been a rum runner, then was carrying coal." Orchard would have been 19 years of age when he painted this. He had returned to Port Hope for a visit in the summer of 1928, which coincided with the fire of 1928 at Trinity College School.

Collection contains a variety of maps, plans, and drawings pertaining to the Town and Township of Whitby. Maps have been physically arranged according to map type, including Street and Tourism, Physical, Political, Transit, Historical, and Architectural Drawings.

The Fort William Street Railway line was originally built and operated by the City of Port Arthur. In a decision by the Ontario Municipal and Railway Board of 1908, the Street Railway was to be managed by representatives from both Municipalities until December 1913, when each Municipality would manage its own Street Railway service. A special committee was appointed by the City Councils of Fort William and Port Arthur as early as 1907. Six representatives were appointed from both Municipalities including Mayor Clavet and Mr. George Hodder (Chair) from Port Arthur and Mayor Murphy from Fort William. Mr. McNaughton, Municipal Clerk for Fort William, was appointed Secretary of the Committee. In addition to Street Railway concerns, this Joint Committee discussed matters relating to telephones, and the supply of gas to the two Cities. Minutes exist for 1907 and 1909 and one meeting in January 1910.

In addition to this joint committee, the City of Fort William established a special Street Railway Committee at a meeting of Council on April 7, 1908. In addition to questions regarding the Street Railway, the Committee was to address the question of the Mount McKay and Kakabeka Falls Railway Co. Members appointed were Alderman Oakley, Peltier, Dean and the Mayor. In January of 1909 Aldermen O’Donnell, Dean, Fergusson and Oakley were appointed. 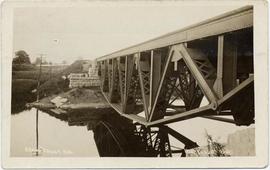 The collection reflects the publishing interests of Nick and Helma Mika. It comprises four main series: photographic files, reference files, printing process files and other materials. The collection is strong in local history materials, particularly relating to the history of the United Empire Loyalists, railways, and the city of Belleville.

Drawings of proposed renovations to the Canadian Northern Railway station created by the Architectural Conservancy of Ontario, Port Hope Branch, 1984-1985.

File consists of one (1) poster-sized plan for a sign for the renovation of the Canadian National Railway station, created by the Architectural Conservancy of Ontario, Port Hope Branch.