Collection comprises photographs of the two First World War Royal Flying Corps training camps at Deseronto, Ontario and notes for an unpublished book, <em>Wings Over Deseronto</em>, on the history of the camps. Camp Mohawk and Camp Rathbun were in operation between May 1917 and November 1918, training men to be pilots for the Western Front. The photographs in this collection are originals and reproductions depicting the aircraft, staff and cadets of the Royal Flying Corps, principally in the Deseronto camps, but also at Camps Borden and Leaside (Ontario) and Camp Taliaferro, in Fort Worth, Texas.

Fonds consists of one framed Roll of Honour/Death Notice for Frank Arkless, and one "Dead Man's Penny," 1917-1919. See item-level descriptions for more information.

Fonds consists of the military records and artifacts of Edwin Albert Osborn of the Canadian Army. Materials are related to E.A. Osborn's military service during World War II, 1939-1945. It has been arranged into three series: Military Documents; Artifacts / Objects; Photographs.

Album of photographs compiled by a member of the Hobbs family. Teddie Hobbs appears in one of the photographs and there is also a photograph of the grave of J. E. Hobbs. The majority of photographs are of the First World War Royal Flying Corps training camps in North America: Camps Borden and Mohawk in Ontario and Camp Taliaferro in Texas. 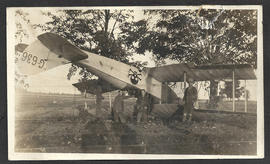 Photographs depicting aircraft and airmen of the Royal Flying Corps, principally taken in and around Camp Rathbun, the pilot training camp situated to the north of Deseronto, Ontario. The majority of individuals pictured are not identified, although the captions 'Jimmie Russell' and 'Cadet Mitchell' appear on two of the photographs.

Books of remembrance. One records the names and dates of death of Women's Institute members of the branches at: Roslin, Plainfield, Phillipston (Bethel) Zion, Quinte, Carmel, Cannifton, Melrose, Foxboro, Tyendinaga East, Moira, Chapman's, Parkdale, Lonsdale and Marlbank (1925-2013). The other is a scrapbook with photographs and brief biographies of men who had enlisted for the Second World War in the areas covered by the Women's Institute branches of: Melrose, Phillipston (Bethel) Zion, Plainfield, Quinte, Roslin and Tyendinaga East (May 1944).

Fonds consists of the World War I diary of Wilbur P. Baulch (Bill), and associated documentation, 1914-1917.

Collection consists of five (5) copies of the "Our Commander March" Sheet Music written by J.W. Chadwick, 1916. The March was dedicated to Lieut-Col. R.W. Smart of the 139th Battalion, Port Hope; and published by Empire Music and Travel Club Ltd., 26 College Street, Toronto.

Fonds consists of records documenting the life of Henry Cassel, particularly his attempt to emigrate from Europe prior to the Second World War and his internment in Canada as a German Prisoner of War (POW). Included is personal correspondence between Cassel and his parents; correspondence written by Cassel to potential employers and Canadian Jewish agencies; legal documents and certificates, such as Cassel's birth certificate and passport; family photo albums documenting the family and lives of Henry Cassel and his wife Reta; Cassel's autobiography; a journal and notebook written by Cassel during his internment; and, other internment records, such as government forms and poems and songs written by internees. Also included are newspaper clippings, articles, financial statements, genealogical research, and anti-Semitic ephemera collected by Cassel. Of particular note are newsletters that were produced during the 1990s by ex-internees who had kept in touch over the years. Records are arranged into 16 files.

The majority of photographs appear to have been taken from 1939-1944 and many feature Bert as a Flight Officer in his military uniform.

The entries in his diaries reflect his attendance and activities at Westervelt College, London, news of friends, social events and recreational activities (including movies, skating, fishing, dancing at dance hall at Wonderland & Springbank Rds., London, and time with friends), church attendance, work at Empire Life, London, Ontario (until early April 1940), bookeeping and work for his father at the Superior Food Store in Teeswater, and flying lessons / night aviation courses in 1939. WWII is mentioned in some of his entries. After enlisting, his entries include notes about flying, training and social activities. Notes are also made concerning his hospital stay for Spinal Meningitis in 1943.

This fonds consists chiefly of records related to William Victor Tranter (1894-1915), known as “Victor”, and his time serving with the 1st Canadian Battalion, Canadian Expeditionary Force, during World War I. Includes his diary written from December 27, 1914 to June 7, 1915 including his experiences at the Battle of Ypres, four letters written by Victor to family between April 1914 and May 1915, photograph of Victor ca. 1914, death certificate, correspondence from hospital chaplain, Sister Rose, and Town of Southampton to Victor’s parents, William and Annie Tranter, In Memoriam Card, transcript of cemetery registration and gravemarker, photograph of gravemarker at Wimereux Communal Cemetery Pas de Calais, France, and newspaper notice of Victor’s death.

The fonds consists of a diary of E.C.A. Gordon and account book for work in the shipyards at Galatea, Constantinople, for the year 1856. The accounts are kept in piastres [Spanish currency] and British pounds.

Fonds consists of correspondence between Captain James R. Allan and Vivien Beer of Strathroy, Ontario before Captain Allan, was killed; press clippings and photographs of Captain Allan and Private Walter Beer while serving in World War I, and scenes of various members of the Beer family.