Fonds consists of photographs created and or accumulated by Jerry Wynne in the course of his activities as an avid photographer. Included are photographs of the construction of the covered bridge on Gordon Street, the Sleeman Centre, and the demolition of the Eaton Centre. 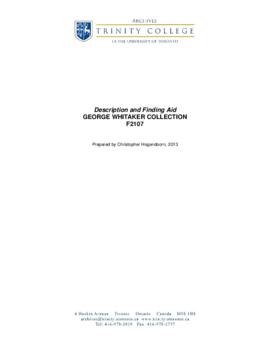 The collection contains records pertaining to George Whitaker’s Provostship, as well as his final departure to England. It consists of vital records, correspondence, financial records, newspaper excerpts, tributes, manuscripts related to his theology teaching, and photographs.

Fonds consists of records created and accumulated by the Ferguson family of Uxbridge and later of North York, Ontario. Included are diaries, correspondence, literary journals, Christmas and greeting cards, cookbooks, and various publications.

The majority of the fonds consists of correspondence, which was written between Beatrice and Murray Ferguson, the Fergusons and their friends, and Beatrice and her mother Gertrude, as well as between Beatrice's grandparents Gertrude and Frank Botha. Included in the correspondence are letters written between Beatrice Botha Ferguson and her pen pals, one of whom was Canadian poet Louis Dudek. Fifteen volumes of the First Statement literary journal accumulated by Beatrice Botha Ferguson from 1942 to 1944 are included in the fonds, as well as fifteen volumes of diaries written by Beatrice that document a twenty-four year period from 1938 to 1962.

For a more detailed description, use this link to the Archives of Ontario's descriptive database: http://ao.minisisinc.com/scripts/mwimain.dll/144/PROV/PROV/REFD+F+4599?SESSIONSEARCH

This fonds consists of their Constitution, minutes and related papers, general correspondence, cash books, reports, pamphlets and mailing lists. The records are directly related to the organization of the Sudbury and District Ministerial Association. This fonds pertains to the social and educational involvement of an organization of Protestant churches in the Sudbury region. The cooperation of SDMA with several community-based organizations, as well as the participation of SDMA with regard to inter-church activities, is well documented. SDMA was involved in activities in the community such as: radio and television broadcasts of Sunday services, a nursing school at Memorial Hospital, help for addiction and alcoholism, an emergency counselling service, religious education, a Northern Ontario home for unwed mothers, helping the families of strikers, weekly services at Pioneer Manor and the Sudbury Sanatorium, and submitting a report to the Royal Commission on Bilingualism and Biculturalism. There are no documents for the year 1960, and very few documents for the years 1955 and 1959.

Collection consists of miscellaneous legal documents accumulated by Samuel Weir. Documents include indentures, deeds, a will, a letter of administration, an order of payment and a summary of land titles. Ten of the documents are from England, while two are from the United States.

Fonds consists of miscellaneous material from Commodore Frank Birch Caldwell’s naval career, from the period 1953-1973. Includes photographs of various ships and some crew. A few photographs have captions on the back. There are maps of Canada dated 1969-1973, as well as reproductions of historical maps of the world. The fonds also includes a citation for a Naval Medal awarded to Caldwell by the Portuguese navy, a caricature, and other memorabilia. There are reproductions of an account of Admiral Nelson’s victory over the French fleet at the battle of the Nile, on the Mediterranean coast of Egypt, originally published in The Times on 3 October 1798.

Fonds documents the official and private lives of several members of the Simcoe family in England and Upper Canada, predominantly in the late 18th and early 19th centuries. The fonds also contains records from John Graves Simcoe's Lieutenant-Governorship of Upper Canada 1792-1796. The records document the administrative and military careers of four generations of men of the Simcoe family, as well as the family's private life, including management of the family estate in Devonshire, financial matters, and genealogical research conducted by later generations of the family.

For a more detailed description, use this link to the Archives of Ontario's descriptive database: http://ao.minisisinc.com/scripts/mwimain.dll/144/PROV/PROV/REFD+F+47?SESSIONSEARCH

Fonds consists of 272 files that document both Allard's professional and personal life. Textual documents include correspondence, telegrams, memoranda, and reports. There are various personal records relating to Allard, including genealogical information, autobiographical memoirs, scrapbooks and agendas and daybooks used by Allard. There are newspaper and journal articles collected by Allard on various topics of interest to him, as well as numerous articles about him. There are also several transcripts of speeches, addresses and lectures given by Allard, as well as transcripts of interviews about him or with him.

In addition to textual records, there are approximately 450 pictures, most of which are in black and white. Many of these are of Allard at various stages of his life. Other photograph subjects include Allard's family and his ancestors, and various military ceremonies. Many of the pictures lack captions or other explanations. There are also approximately ten maps, mainly of European locations where Allard fought during the Second World War, a few drawings, blueprints, travel albums, flags, badges, greeting cards, and certificates.

Each of the stages of Allard's life is documented. From his childhood, to his personal participation in the Second World War, the Korean War, as well as Canada's more general involvement, to his years in the USSR and West Germany, to his role in the unification of the armed forces and his time as CDS, Allard's rich and varied experiences can be largely reconstructed from the diverse materials found in this fonds.

Fonds consists of records created and accumulated by Sir James David Edgar, his wife Matilda, and various other members of the Edgar family.

Their records include correspondence, both political and personal, speeches, lecture notes, invitations, published material, scrapbooks and photographs. As J.D. Edgar was actively involved in politics, correspondents includes many prominent politicians of his day, including Alexander Mackenzie and Sir Wilfred Laurier; there are also letters regarding important political events such as the North-West Rebellion.

Fonds also contains records from other family members, such as the diaries of Maud Edgar, a hand-written Shawnee-English dictionary compiled by Thomas Ridout, a typescript copy of Thomas Ridout's Old Memoir covering the period 1786-1788, photographs of various members of the Edgar family, genealogical material, and correspondence with family in the United States and overseas.

The fonds is divided into 11 series.

For a more detailed description, use this link to the Archives of Ontario's descriptive database: http://ao.minisisinc.com/scripts/mwimain.dll/144/PROV/PROV/REFD+F+65?SESSIONSEARCH

Fonds consists of personal and professional records of Charles Shirreff and other Shirreff family members. Included are correspondence, land records, genealogical information and biographical information regarding the Shirreff family, notices of appointments, diaries, and other records. Correspondence includes: letters received by Charles Sherriff before his emigration from Scotland; letters regarding Colonel John By; letters detailing Alexander Shirreff’s expenses while exploring the land between the Ottawa River and Lake Huron; letters regarding the purchase of land and the purchase of the Bytown Gazette; and letters regarding the Shirreff family’s claim to the earldom of Stirling. Land records consist of: land grants; a Scottish property transfer; a rent roll of Fitzroy Harbour lots; a statement of property at Fitzroy Harbour; maps of the land by the Carp River and part of Fitzroy Township; and a plan of the Fitzroy Harbour. Genealogical and biographical material includes newspaper clippings, manuscript histories of the family, and a history of St. Andrew’s Presbyterian Church at Fitzroy Harbour.

For a more detailed description, use this link to the Archives of Ontario's descriptive database: http://ao.minisisinc.com/scripts/mwimain.dll/144/PROV/PROV/REFD+F+604?SESSIONSEARCH

This is an artificially created collection comprised of miscellaneous legal documents from unknown sources accumulated by the Archives. Included in the collection are mortgages, affidavits, contracts, deeds, wills, correspondence, and stock certificates drawn from the files of various wound-up law firms.