Attack of Factories in Europe

Reports on air-raids on factories including details of British bombing missions, analysis of continental factories and factory air-raid shelters.

Attack of Factories in Europe

No Price Too High - Series 2

This series contains the research on individual veterans for the No Price Too High documentary program and book.

Owners and Tenants of 29-33 Walton Street

File consists of typed notes on the owners and tenants of 29-33 Walton Street, Port Hope (Gillett Paterson Block), from 1845-1901.

Item is the Affidavit of James Martyn regarding the boundary between Lot 13 and Lot 14 of the 5th Concession.

Item is a Statutory Lease between Arthur T.H. Williams and Archibald Sands regarding the 'Ontario Block' building at the corner of Walton and Ontario Streets.

Item is a Statutory Lease between Arthur T.H. Williams and Archibald Sands regarding the 'Ontario Block' building at the corner of Walton and Ontario Streets.

Item is a Deed between The Canada Permanent Building & Savings Society and Cecelia Spry, regarding Town Lot 59 in Port Hope.

File consists of a copy of memoir detailing a soldiers experience during; the fall of France in 1940, defense of Britain in 1940, the D-day's of Sicily and Italy, and his torpedo experiences in the Mediterranean during WWII.

This fonds consists of operational and local history documents that were saved by the staff of the Ayr Branch of the Region of Waterloo Library over an extended period of time. Much of this fonds was collected when the Ayr Branch was still an ind... 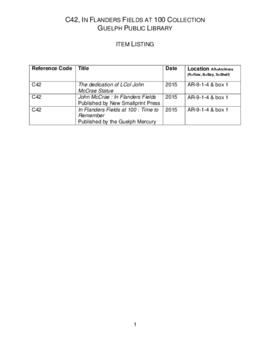 Collection consists of materials produced to celebrate 100 years of the poem in Flanders Fields by John McCrae. Included is a pamphlet outlining the events and speakers for the unveiling of the John McCrae Statue. There is also two booklets &qu...

This collection consists of photographs, primarily slides, acquired by the Guelph Public Library archives. The slides offer a wide range of images covering various aspects of the City of Guelph and its history. Including are various photographs o...

The fonds consists of just under a metre (.84 m.) of textual records and artifacts, and spans the years 1884 to 1994(?). There are 23 minute books, 7 parish registers, 4 ledgers, several financial and annual reports and some artifacts pertaining t...

Fonds consists of records of the activities of St. Alban the Martyr congregation in Ottawa, Ontario. It includes parish registers, 1865-1983, vestry records, 1865-1999, service registers, 1880-1993, records of committees and organizations, financi...

Fonds consists of records of the activities of the Parish of Clayton, Ontario. It includes parish registers, 1829-1962, service registers, 1989-1990, records of committees and organizations, financial records, special services and events material,...