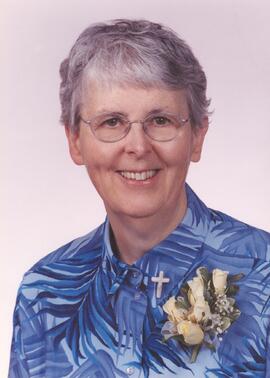 The sous-fonds reflects Sr. Mary Lillian Kuntz’s time as an educator, judge, administrator, and her Congregational service. The earliest record is a class photograph from St. Angela’s College where she was a student, followed by her high school diploma from Catholic Central High School in 1953. The records have a global geographic spread with the inclusion of colour transparencies of her travels to the United Kingdom, Africa and Europe. The materials focus on her time in Yellowknife, NWT, Uganda, Nelson, B.C., and London, Ont. The sous-fonds includes photographs, sound recordings, moving image recordings, and a diploma. 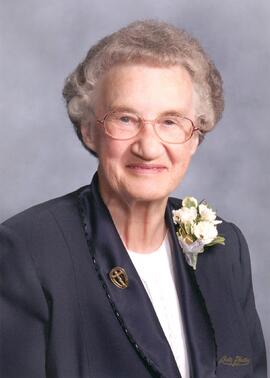 The sous-fonds contains photographs of Sr. Mary Leo Kirwin’s Congregational and family life, as well as pamphlets and memorabilia from the reunions she attended for her teacher training class, personal prayer books, religious artifacts, a photo directory from the Diocese of London, correspondence, a quilt she made by hand, and a Red Cross pin she earned for her service. The sous-fonds consists of records kept by Sister Mary Anthony Hartleib, the majority of which are about her artwork. The records include sale agreements, publications, and thank-you letters from groups that received her icons. Also included in the sous-fonds are some of her original artworks as well as photographic reproductions of artworks that may or may not be held in the Archives. The sous-fonds also consists of speeches and presentations written by Sister Mary Anthony, and certificates and records of graduation. 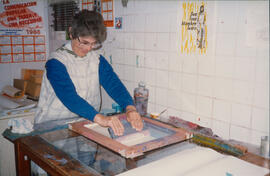 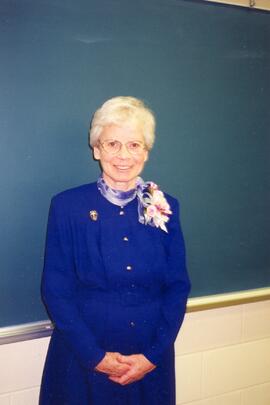 Sous-fonds consists of textual records, three albums and loose photographs depicting various events of Sister Eveline's life. The photographs are of her 50th Jubilee celebration at St. Andrew the Apostle Church in London, Ontario. There are also photographs and postcards from her personal and family life in Ontario, her time at Lumen Vitae, Belgium, and her time in the Exodus program, in Dittmar, Missouri. The sous-fonds also includes handwritten correspondence, certificates, and newspaper clippings and obituaries. The majority of materials are in English, with some correspondence and the Lumen Vitae booklets written in French. The fonds consists of records related to the medical career of Dr. Ralph A. Williams. They are arranged into the following series:

The fonds consists of following series and relate to history of the Oxford North Women’s Institute:

Fonds consists of Yvonne Housser's journals and correspondence (1931-1980), including correspondence with her husband Frederick Housser (1931-37), and Arthur Lismer (1937) and notes on Theosophy (1953-1980); lectures, book reviews and stories (1933-1980); and documents and drawings pertaining to her travels and sketching trips (1939-1975) to Europe, the United States, Mexico, and Québec. Also included is a cassette tape of a conversation between Housser and Lora Senechal Carney.

Collection predominantly contains oversized scrapbooks compiled by local branches of the Women's Institutes, under the direction of The Federated Women’s Institutes of Ontario with a purpose to document village histories. These types of scrapbooks known as Tweedsmuir Histories, were named after the Governor General's wife Lady Tweedsmuir, who encouraged Women’s Institute branches to preserve the history and the changing environments of rural communities. Scrapbooks include newspaper clippings, photographs, letters, maps, as well as handwritten and typed local histories. Also included in this collection are administration records for the Nelson Women's Institute. Columns from the Burlington Gazette, October 1977 through December 1979. Written by Helen Langford on behalf of the Burlington Historical Society and compiled by Burlington Public Library Staff.

Burlington Public Library has copies of Vernon's Burlington and Hamilton Suburban Directory from 1959 to 2013. Searching can be done by name, address or phone number.

Collection consists of one postcard album and several loose postcards. The postcards offer a wide range of images covering various aspects of the city of Guelph and its history. Included are images of Park Ave, Paisley street, London road, main street, Eramora road, Bell Piano and Organ Company, the Opera House, and Jubilee Park. Images of the Speed River and various panoramic views of Guelph are also evident. There are also photographs taken by 19th photographers such as W. Marshall and T. Smith. The album includes approximately 40 pieces of paper ephemera.

The fonds consists of following series and relate to history of the Oxford North Women’s Institute:

The fonds consists of records related to the Sawtell family’s history, Oxford County, Brantford, and southern Ontario. It is arranged into the following series:

This collection consists of published and unpublished books, booklets, pamphlets, essays, and other assorted material collected by the Guelph Public Library that document the history of Guelph.

These items are arranged sequentially by an old reference code (P).