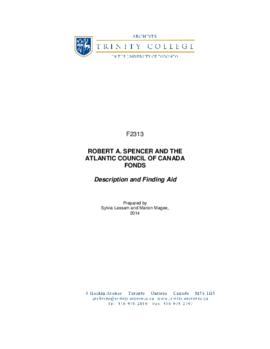 Fonds consists mainly of files relating to both the administrative and public activities of the Atlantic Council of Canada during the years when Robert A. Spencer (RAS) was executive director of the Council. Also included are files relating to the ACC's involvement with the Canadian government, the North Atlantic Treaty Association, the Atlantic Treaty Association (ATA), the Committee on Atlantic Studies (CAS), and the Turkish Atlantic Council. 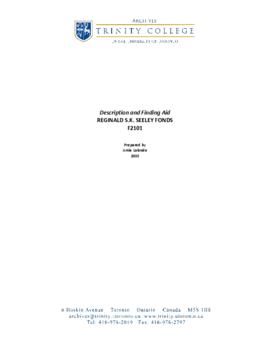 The fonds consists of lectures, speeches (in person and on radio broadcasts), and sermons given by Seeley in his capacity as priest, religious leader, and provost. Files include programmes from services, events, and conferences, pamphlets written by Seeley, notebooks, and correspondence between Seeley and others. Fonds also includes letters received by Mrs. Seeley after her husband’s death, newspaper clippings and obituaries, official documents, photographs, and a printing plate. 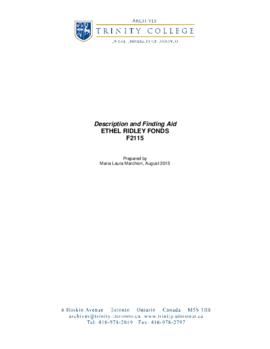 The fond consists of photocopies of records that document her military career, and photographs pertaining to the life, education and military career of Ethel Blanche Ridley. 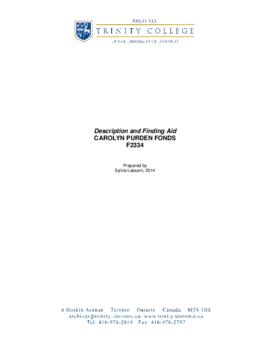 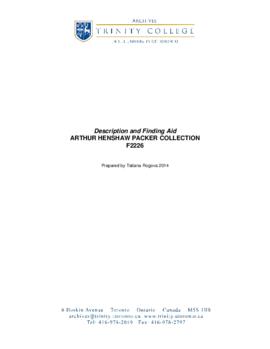 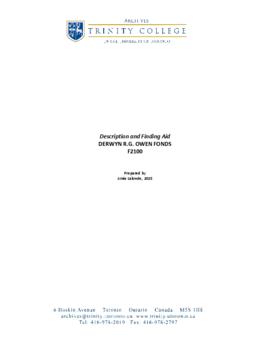 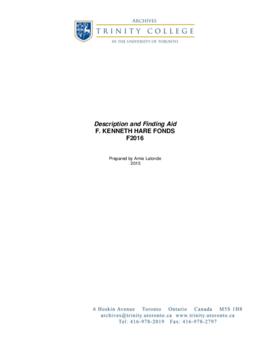 Fonds contains records relating to Hare’s work as a climatologist, geographer, and scholar. Files include correspondence, conference and meeting materials, published and unpublished reports and articles (by Hare and others), scientific data, photographs, newspaper clippings, letters of reference, pamphlets, newsletters, and other publications. Files also include a typed copy of Hare’s memoir, I’ll Always Take a Windowseat, as well as academic certificates and degrees. 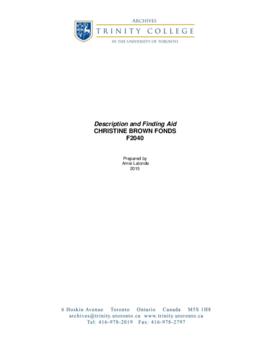 The fonds contains materials relating to Christine Brown's anthropology paper "Identifying Processes of Social Change at St. Hilda's College." This includes audio tapes of interviews with students and alumni of St. Hilda's College, material on access restrictions to these interviews, written submissions, and the paper itself. 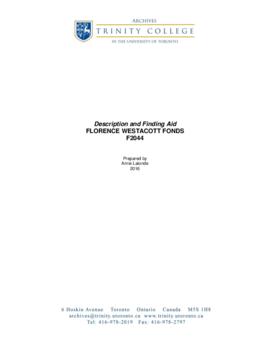 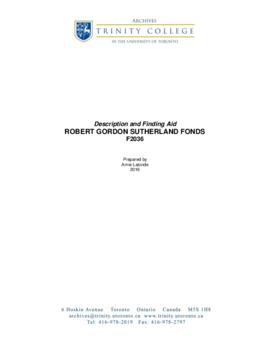 The fonds consists of typescripts of a journal of a trip across Canada written sometime after 1898 and of six lectures on Shakespearean plays and heroines, as well as of newspaper clippings, correspondence, and printed items. 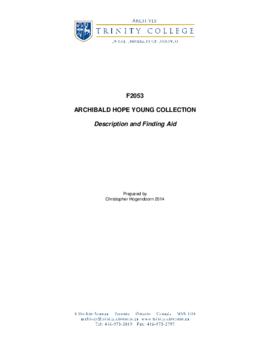 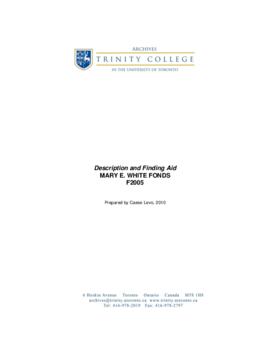 The fonds includes five series. Series one consists of correspondence files of organizations Mary E. White was involved with, in particular the American School of Classical Studies at Athens and the Classical Association of Canada, and of general correspondence. Series two consists of files of writings, speeches, talks, and lectures by Professor White, including an unpublished manuscript of a book on the Peisistratidai and a University of Toronto Convocation address to honour courses in the humanities. Series three consists of examination papers, mainly from Trinity College, Oxford, and Newnham College, Oxford, for the period 1873-1894. Series four consists of files of reading and lecture notes in Greek and Roman history. Series five consists of papers and off-prints of works by other people, probably in large part manuscripts received for publication in "Phoenix." 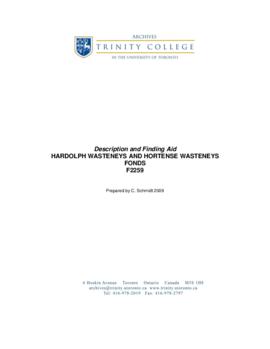 Fonds consists of the personal records of Hortense Wasteneys and those she accumulated over the course of her involvement with Trinity College as well as documents related to her research on community service organizations. It includes original source documents accumulated by her father, Hardolph Wasteneys, over the course of his involvement with the Toronto University Settlement as Chairman of the Board of Directors. 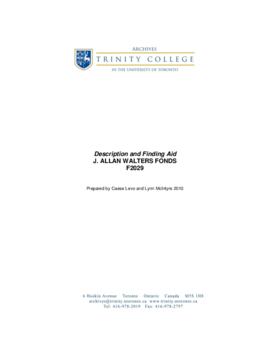 Fonds consists of extensive correspondence from Dr Walters to his parents, his brother and sister from 1925 to 1945, when he wrote home every few days. They cover student life at Queen's University and more extensively at Trinity College, his working experiences on a Great Lakes steamer, his early married life, his experiences during the Second World War and his career as a doctor. 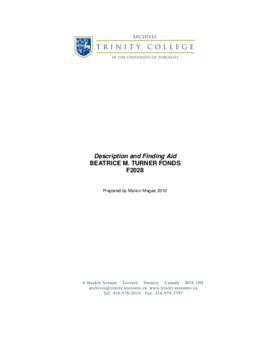 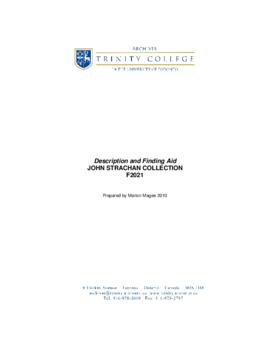 The collection includes correspondence from every period of Strachan's life, official documents, notes, and writings. 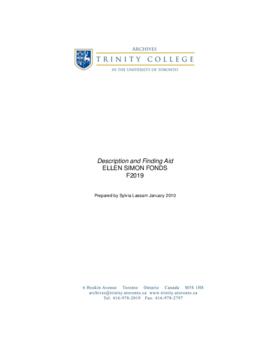 Fonds consists of pencil drawings executed by Ellen Simon as designs for the stained glass windows on the east wall of Strachan Hall, Trinity College. At the time she was working for the Yvonne Williams Studio, and the work was commissioned by Gerald Larkin.
Three of the windows were completed. The fonds also includes a statement written by Ellen Simon in 1999 regarding the commission, design and execution of the windows. 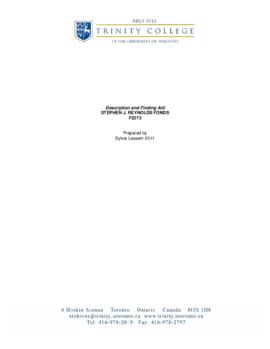 The fonds consists of records kept by Stephen Reynolds during the course of his adult life. These include correspondence with family, friends, and colleagues that illuminate his personal life, his Christian faith, and his various pastoral and intellectual pursuits. Carbon copies of many outgoing letters were created and kept. Reynolds kept an intermittent diary through the time period represented here. These were sometimes typed, and often handwritten in small notebooks. He apparently removed pages from these notebooks and inserted them in files with correspondence and other material from the same time period.

Other records include academic papers, research material, sermons, prayers, drafts of manuscripts, course materials, and some official documents such as academic transcripts. 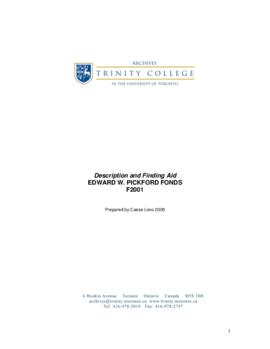 The fonds consists of a notebook, with the title "Notes on the 39 Articles of the Church of England, the Provost" (the provost was C. W. E. Body); a sermon, "Pastoral Theology"; and a letter from A. H. Young, registrar of Trinity College, to Pickford acknowledging Pickford's intention to write the primary examination. 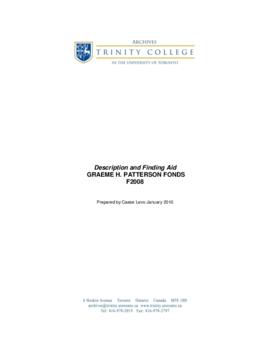 The fonds is comprised of material relating to Patterson's teaching activities at Trinity College, including correspondence, manuscripts of his writings and publications, thesis notes, materials for lectures and research materials. The fonds also contains family papers which include material on the people and events of Paris, Ontario, in the nineteenth and early twentieth centuries, including records relating to the immigration of Home Children to Canada.