United Church of Canada Board of Christian Education fonds

United Church of Canada. Board of Christian Education

Fonds consists of records created or collected by the Bayham Historical Society. Fonds is arranged into the following series:Minutes series

Fonds consists of photographs, newspaper clippings and other records documenting the history of the St. Thomas plant of Canadian Timken Limited. Fonds is arranged into the following series:Newsletters series, 1989-1992Newspaper Clippings series, 1...

Fonds consists of records created and maintained by John Honsberger. The majority of the records in the fonds relate to his activities as editor of the Law Society's "Gazette". Records also relate to his interest in and writings abo...

Records relate to the creation and development of the Orillia Campus. 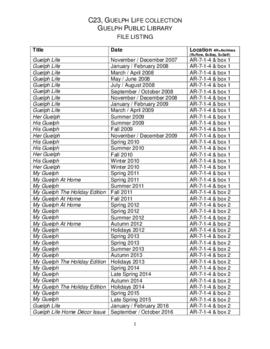 This collection consists of periodicals collected by the Guelph Public Library Archives. Titles include His Guelph, Her Guelph and At Home in Guelph, My Guelph at Home, and Guelph Life. These magazines focus on the people and events in Guelph and ...

Collection consists of records related to various aspects of the history of the Municipality of Port Hope. For more detailed information, refer to series, and file-level descriptions.

Fonds consists of the following series: 1) Administrative Records; 2) Applications; 3) Conferences; 4) Courses and Training; 5) Records of the Board; 6) Records of the Executive; 7) Records relating to the Annual General Meeting; 8) Finance Recor...

Margaret Phillips began her career in municipal recreation, and became an advocate and activist for feminist and social justice issues. She was a founder of the Northern Woman's Bookstore, an executive director of the Lakehead Social Planning...