Fonds consists of one keepsake album, one publication, and three photographs.

The keepsake album was won by Katie for "diligence" while a student at school in Alberton, Ontario in 1885 and presented by her teacher, J. Kerr. She won the album in December 1885 and it was dedicated by her mother in June of the next year. The album was originally made in Belfast, Ireland.

The album contains pasted-in items including pictures cut out from newspapers, advertisements from retail stores, business cards, greeting cards, and other items of unknown origin. The album also contains inscriptions from various individuals, dated from 1885 to 1899.

The inscriptions, mostly involving humorous poetry, were written by her relatives, schoolmates, and other individuals she met from Alberton, Dundas, Delhi, Cainsville, and St. Thomas Ontario. These include members of the Strowbridge, Van Sichel, Van Sickle, Applegat, Edy, Massen, and Cohoe families. Many of these families were, like the Strowbridges, of German extraction.

The photographs include an unidentified tintype (most likely of Katie's parents John and Hannah), a carte de visite in a cardboard enclosure (produced by Park and Company of Brantford and inscribed on the back, "Mrs. William S. Brett, nee Katie Strowbridge"), and a hand-coloured photograph of Katie Strowbridge.

The fonds also contains a copy of "Nyal's Yearbook 1912" which was placed in the album, most likely by Margaret Strowbridge.

For a more detailed description, use this link to the Archives of Ontario's descriptive database: http://ao.minisisinc.com/scripts/mwimain.dll/144/PROV/PROV/REFD+F+4600?SESSIONSEARCH 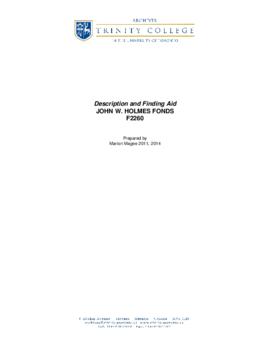 The fonds consists of textual material and photographs. Much of the material relates to articles, speeches, books, book chapters, radio/television scripts, and book reviews written by JWH in the areas of Canadian foreign policy and international organization. As well, there is material relating to conferences and seminars in which he participated and organizations with which he was involved, files on his teaching at Glendon College, the University of Toronto, and Leeds University and his doctoral students, files of business and personal correspondence, material collected for his two-volume work, <i>The Shaping of Peace</i>, family and professional memorabilia.

Contents: One large scrapbook about the Murray family, mostly photographs, compiled by Ken Murray? Consists of 35 pages containing 345 photographs, b&w and col., 161 other items. Includes studioportraits, candid snapshots of ken Murray's forbears, family and friends form the late 1800's to 2003. Includes artifacts such as ribbons, crests and letters, ephemera such as certificates, programs, clippings, and correspondence.

Fonds consists of 92 albums containing approximately 11,000 photographs of steam-powered vessels. These vessels were part of the American and Canadian Great Lakes fleet in the nineteenth and twentieth centuries.

Included are photographs of steamships, tugboats, barges, lighters, wreckers, government vessels as well as prints depicting the Welland canal and communities along the canal. Also included are miscellaneous photographs of unidentified individuals.

Although the prints in the albums do not necessarily possess identifying captions, Kidd prepared indexes to the albums themselves.

For a more detailed description, use this link to the Archives of Ontario's descriptive database: http://ao.minisisinc.com/scripts/mwimain.dll/144/PROV/PROV/REFD+C+8?SESSIONSEARCH

This collection of Eaton materials was created by the Canadian Broadcasting Corporation during the production of the programme, “The Prophet from Pugwash”. The producer was Carol Moore Ede Myers. The collection is arranged into six series consisting of: research files, interviews, correspondence, broadcast scripts, production files, photographs and slides, and reel-to-reel audio tapes.

Correspondence, diaries, ephemera, manuscripts, photographs and artifacts, documenting the life and career of Frances Kathleen Montgomery. Also present is a small amount of material, primarily photographs, relating to the Montgomery and Havey families.

Fonds consists of prints of formal individual and group photographs of members of the Ziegler family and others, perhaps related, produced by a variety of studios in Canada and the United States, mostly in Berlin [Kitchener] and Waterloo, Ontario. Only a few prints bear inscriptions indicating subjects by name, and most of these are clearly members of the Ziegler family: Gordon and Harvey Ziegler, sons of Henry A. Ziegler and his wife Anna; and their cousins Lizzie Ann, Delphina, and Edna Schaefer, daughters of Louisa Ziegler and William H. Schaefer. There is one photograph of Lydia (Ziegler?) Huehnergard, possibly their aunt.

For a more detailed description, use this link to the Archives of Ontario's descriptive database: http://ao.minisisinc.com/scripts/mwimain.dll/144/PROV/PROV/REFD+F+4413?SESSIONSEARCH

Fonds consists of material created and/or accumulated by Allan Grossman that documents his personal life and political career. It includes pins, buttons and membership cards related to his association with the Progressive Conservative Party of Ontario, scrapbooks and clippings that document his work as a Member of Provincial Parliament and testimonials from numerous friends and colleagues regarding his public service.

Also included are the Province of Ontario Letters Patent incorporating the Junior Conservative Association of Ontario, a poster entitled "General rules and orders to be observed and obeyed by the prisoners in the gaol of the United Counties of York and Peel," 1905, and a panoramic photograph of the group of individuals attending the Conservative Forum held at Trinity College, Port Hope, Ontario, 1942.

For a more detailed description, use this link to the Archives of Ontario's descriptive database: http://ao.minisisinc.com/scripts/mwimain.dll/144/PROV/PROV/REFD+F+4371?SESSIONSEARCH

Contents: this accrual consists primarily of textual and graphic material belonging to or created by Dorothy Russell, including her diaries, correspondence and photograph albums. Includes also a small amount of Schantz Reunion material, the 1913 register. The photograph albums originally belonged to different members of the family.

Fonds consists of 50 photographs of horse teams and farming, and unidentified portraits. The portraits were taken by various photographers primarily located in Orillia, Ontario. Also included in the fonds is a Grand Dominion & Industrial Exhibition ticket (1887); a J. McLauchlan & Sons advertisement for cream soda (19--?); a postcard of Victoria Harbour, Lamber Co's Office; and a hand coloured postcard of H.R.H. The Prince of Wales on the 1st Anniversary of his visit to Canada in 1919.

For a more detailed description, use this link to the Archives of Ontario's descriptive database: http://ao.minisisinc.com/scripts/mwimain.dll/144/PROV/PROV/REFD+C+163?SESSIONSEARCH

The fonds consists of textual and graphic material documenting the activities and membership of the Toronto Cloakmakers Union and International Ladies' Garment Workers' Union. Included are I.L.G.W.U. membership dues and strike cards issued to Sara Clodman; letters and cards announcing I.L.G.W.U. meetings, celebrations, and other matters; an invitation to a dinner honouring A. Magerman's 25 years in the Cloakmaker's Union; copies of the Golden Jubilee Souvenir Journal and the 40th Jubilee Celebration book; a photocopy of the Constitution of the I.L.G.W.U.; Toronto Cloakmakers' Union Local 14 Minute Book in Yiddish; and five black and white photographs of union members, events, and committees.

This fonds consists of records created, collected and maintained by Verne McIlwraith related to his professional and personal interestst. Included in this fonds are correspondence, historical research, typescripts, vertical files and newspaper clippings. These records document the varied interests of Verne McIlwraith as a historian and newspaper journalist. The fonds is divided into eleven series.

Fonds consists of photographs created and or accumulated by Thomas A. Keatinge during the course of his activities as Manager of the Bond Hardware Company and his participation in the First War World. Included are photographs of his personal life and travels.