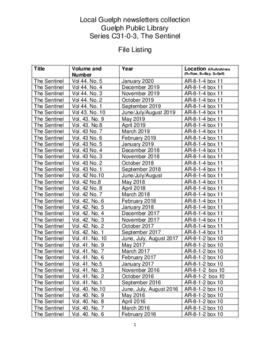 Series consists of the newsletter the Sentinel created by Guelph and Wellington Seniors Association.

Fonds consists of personal marriage registers for Toronto, Mississauga, Hamilton and surrounding area, 1984-1999; and correspondence from Rev. John McDougall to his wife, 1885.