Series consists of three minute books which record the details of the bi-weekly and then monthly meetings of the organization.

Series consists of correspondence with various businesses regarding either sponsorship of advertisement with and for the Whitby Dunlops. Series also consists of lists and other documents created to account for program advertising, including invoicing.

Fonds consists of personal material belonging to the Bateman family, including family photographs, some birth, death, and marriage information, and newspaper announcements. Fonds also consists of the land deeds for the family farm on lot 23 concession 1 (Hopkins Street). 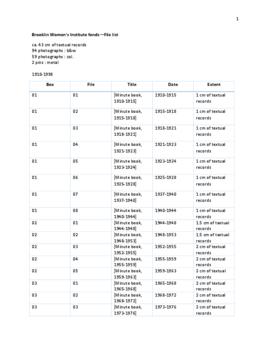 Item consists of a newspaper article written by Brian Winter and appearing in the Oshawa Times on 27 November 1980 on the occasion of the 50th anniversary of the appointment of Reverend Adye as rector at All Saints' Anglican Church. Adye was expected to attend the church service held in his honor as well as the following reception. The article also contains Reverend Adye's biographical information.

Fonds consists of newspapers, photographs, financials, and personal documents relating to the professional and private lives of Carl Mantz, including his wife Elizabeth Gibson. Included in the fonds are records pertaining to the purchase and maintenance of the Whitby Weekly News building, correspondence and letters regarding his enlistment in the RCAF, programs and background information for the Ten Centuries concerts, and the meeting minutes for his initiatives concerning Whitby senior citizens. Of particular interest are the newspaper photographs which represent various events, people, and places of Whitby in the 1950s and 1960s. The fonds is composed of the following series: Elizabeth G. Gibson records, 1969; Personal records, 1931-1980; Community Involvement records, 1962-1975; Financial records, 1938-1971; Clippings; and Photograph 1950s-1960s.

Series contains records that pertain to the ceremonies and rites of the organization. Records include a hymn book, odes, and manuals, ritual books for the various ceremonies performed by the Royal Templars. Most of this material was issued by the Dominion Council located in Hamilton, Ontario.

Series consists of the incoming and outgoing correspondence of Reverend Adye. Correspondence relates to the activities relating to All Saints' Anglican Church and the 1st Viscount Greenwood. There is also correspondence which pertains to Adye's involvement in organizing the Drumhead Service in October 1937. 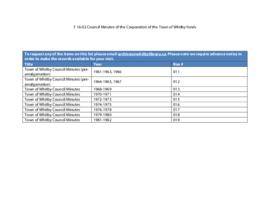 Series consists of minutes from Town Council meetings of the Town of Whitby and include the adoption and consideration of minutes from committee meetings, particularly relating to key issues such as capital expenditures, community plans and development, transportation, infrastructure, zoning applications, and the approval or rejection of by-laws for the City. Also included are the minutes concerning the amalgamation of the Town of Whitby and the Township of Whitby in 1968.

Series consists of the diary kept by Kay Irwin, club secretary, during the team’s trip to Europe for the World Ice Hockey Championship. She wrote about the team’s progress in the hockey tournament and her daily activities while visiting London, Frankfurt, Sweden, Oslo, Zurich, and Paris. Series also includes items found within the diary including cards and an itinerary.

Series contains a variety of collectible items pertaining to the Whitby Dunlops, including player cards, pennants, patches, song sheets, tickets, and signs. Series also consists of two medals from the World Ice Hockey Championship game in Oslo, one which belonged to Bus Gagnon, as well as the four pucks used in the games at Oslo. There is also a collection of lapel pins from the former Soviet Union.

Series consists primarily of records pertaining to the 25th anniversary of the World Ice Hockey Championship, including planning documents, invitations, itineraries, and event programs created by Verna Roberts, assistant to Whitby Mayor and former player, Bob Attersley. There are two other event programs in this series.

Series is comprised of the financial records of the Whitby Dunlops. Records include accounting ledgers, balance sheets, accounts payable and receivable, reports from the treasurer, and payroll information.