This series contains records related to the celebration of Jubilees by the Sisters. It includes photographs, programs, invitations, speeches, hymns and clippings.

The series contains records documenting the various activities of the London Donations Committee. These include charitable donations in Canada and abroad, educational bursaries given predominantly to community members in London and southwestern Ontario, as well as donor awards and recognitions received by the Sisters of St. Joseph. Records include administrative correspondence, annual reports, newsletters, press clippings, a magazine, photographs, certificates, and a plaque.

The sous-fonds contains photographs of Sr. Mary Leo Kirwin’s Congregational and family life, as well as pamphlets and memorabilia from the reunions she attended for her teacher training class, personal prayer books, religious artifacts, a photo directory from the Diocese of London, correspondence, a quilt she made by hand, and a Red Cross pin she earned for her service.

This series is a collection of reference materials collected by the Sisters illustrating the history and foundation of the congregations in Canada, the USA, and France. This series illustrates Mother St. John Fontbonne’s life and work. There is a special focus on the history of the Sisters of St. Joseph in the London diocese. The series is comprised of publications, calendars, correspondence, news clippings, photographs, postcards, an international directory, family tree diagrams, and a watercolor painting.

Sous-fonds consists of textual records, three albums and loose photographs depicting various events of Sister Eveline's life. The photographs are of her 50th Jubilee celebration at St. Andrew the Apostle Church in London, Ontario. There are also photographs and postcards from her personal and family life in Ontario, her time at Lumen Vitae, Belgium, and her time in the Exodus program, in Dittmar, Missouri. The sous-fonds also includes handwritten correspondence, certificates, and newspaper clippings and obituaries. The majority of materials are in English, with some correspondence and the Lumen Vitae booklets written in French.

This fonds consists of records primarily related to the history and administration of the St. Joseph Health Care Society in London. There are some additional materials related to its responsibilities to facilities in Chatham and Sarnia. The fonds contains correspondence, legal documents, minutes and reports.

This series contains the records of the committees, meeting minutes and newsletters. Newsclippings on social justice issues, particularly poverty and human trafficking but also including the London Housing crisis, women’s rights, refugee rights, indigenous rights, the 2001 September 11th terrorist attack, the 2003 War in Iraq, The 1997 Kyoto protocol, and the Israeli occupation of Palestine. It also includes intercongregational correspondence, photographs, correspondence with government and protest groups, fliers, brochures, and information leaflets on events and campaigns in London, Canada, and abroad. 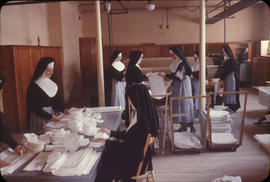 This series contains records reflecting the policies and procedures of the congregation from the late 1960s to the mid-2000s. Included in the series are community handbooks and Called to Unity booklets (guidance for the Sisters in their union with God and the community), both of which discuss the Sisters’ role within and outside the congregation. Topics include community prayer, education, donations, finances, legal advice and procedures, and travel policies. Also included are position papers detailing how a Sister is to behave and conduct herself as a member of the congregation, which were prepared by various committees including the spiritual life commission, habit commission, commission on education, and homemaking commission. Records relating to congregational staff include the Human Resource Policies Handbook, which details the roles and responsibilities related to the working environment. The other records in this series pertain to the congregation as a whole; these include information on sexual misconduct, alleged abuse, and how misconduct is reported and dealt with in the congregation. Also included is policy pertaining to the appropriate use of technology, such as computers and the Internet. There are also correspondence, memos, and reports related to the development of policy by the travel committee, who mediated discussions around the Sisters’ travel.

This series includes digital and printed transcripts of oral history interviews with the Sisters, a hand bound typed and illustrated memoir, a typed draft memoir, e-mail correspondence regarding the Federation oral history project, and a newspaper clipping.

This series contains records relating to the administration for The Hope Project in London, Windsor, and Edmonton, and 61 applications for grants from the London Hope Project. The records include correspondence, brochures, notes, photographs, newspaper clippings, budget records, a booklet, applications, receipts, and business cards.

The fonds consists of histories for Killam, Galahad, Rimbey and Stettler hospitals that have been combined to create a history of the Alberta hospitals run by the Sisters of St. Joseph. Killam General Hospital was opened for the longest period of all these hospitals, and therefore a large quantity of the combined history is about this hospital. Along with the series for the histories of the four hospitals, there are series for commemorative and administrative materials. The fonds contains community histories, a timeline, staff listings, correspondence, newsletters, pamphlets, and photographs.