Fonds consists of correspondence, tax receipts, pamphlets, and invitations found in a home purchased by Martha Hendriks in 2001. The home is located at 1202 Morton Line, Cavan, Ontario and was owned previously by a farmer named Daniel Nill (1915-[1985]). Included are letters written by Frances [ ], New York, to Daniel Nill between 1933 and 1940. Also included are letters, agreements, pamphlets, etc. associated with John Mason, William Mason, Orlie Mason, and G.A. Mason. These items are dated between 1886 and 1915. 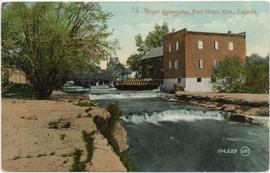 Collection consists of memorabilia and material pertaining primarily to the activities of the Whitby Dunlops during the team's active years from 1957 to 1959. There is also material which relates to anniversaries and other events in the years following the team's dissolution in 1960. Collection is comprised of 8 series including: Programs, Publications, Ephemera and artifacts, Team information, Events, Diary of Kay Irwin, Postcards and photographs, and Video.

Series consists of serving ware connected to the history of Trinity College School.

Fonds consists of records documenting the activities of the Trinity College School Board of Governors. Included are surveys, reports, meeting minutes, notes, and correspondence.

Trinity College School Board of Governors

Series consists of records documenting the general business activities of the Trinity College School Board of Governors, organized by year. Included are correspondence, notes, and reports.

Series consists of the magazine TCS News, formerly The Old Boys Bulletin, published by Trinity College School. In its present format, the TCS News is published twice a year, in the Spring and in the Fall.

A View From the Hill

Series consists of the TCS Prospectus, currently known as Life at Trinity. This publication introduces guardians of prospective, as well as current, students to life at Trinity College School. This includes rules, regulations, and expectations of behaviour and conduct. It is published once annually.