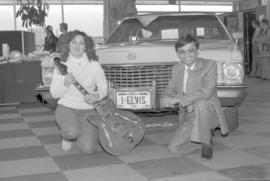 Item is a full-text typewritten address given by George Gale to a meeting of the Canadian Bar Association on the subject of women in law. Item has been annotated by Gale. 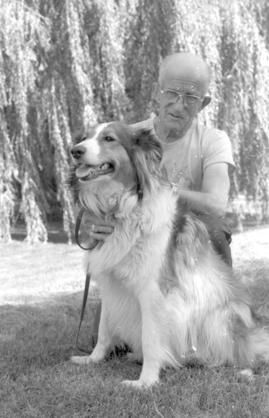 This photograph shows John Loghrin of the Guelph Humane Society with Lady, a collie-cross.

Item is a point-form and full-text typewritten address given by George Gale to a meeting of the Women's Law Association of Ontario on the subject of divorce, marriage and the law.

Item is a framed print from the Douglas R. Greer Collection entitled: "Light & Dark Cahill, a brakeman on the Erie & Lackawanna Railroad, New York. Dry flies are tied with waterproof rooster neck-hackles, which enable them to float. The sinking wet flies are tied to emulate the underwater stage of an insect's life. A popular legend involving Daniel Cahill established this young sportsman as a conservative pioneer. The related occasion was a serious derailment of Daniel's train, and he re-entered the capsized car to retrieve a number of rainbow trout destined for a hatchery, and released them in a nearby creek." 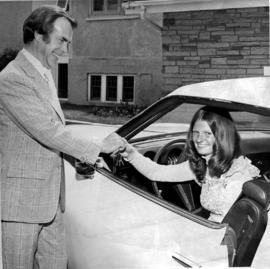 This photograph shows Shirley Taylor accepting the keys to the new car she won in a raffle from Rotary Club of Guelph Vice President Bill Parker.

"Memoirs of My Life" by George Wilson

Series consists of a type-written copy of "Memoirs of My Life" by George Wilson, c1862. It was written in Montreal, and dedicated to Sarah (his wife). The series also includes one edition of the Port Hope Evening Guide (17 Jun 1929), as published by Geo. Wilson.

Item is a photograph of John Geller posing with a group of students at Innis College, University of Toronto, where he participated in a student mentoring program. 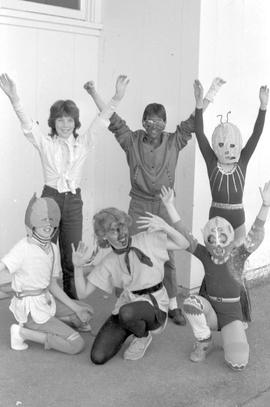 This picture shows the rehearsal of the video "Thriller" by Paisely School Students. 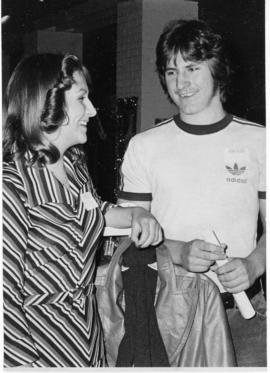 This photograph shows the finalists of the Miss Plater contest Jane Legault of John F. Ross, Kathy Kelly of BM, and Jennifer Hudman, a Rennie’s employee.

Massed for a "Montgomery barrage", medium artillery of the British forces awaits firing orders to protect crossing of the Rhine in northern Holland.

Item is a hand-painted movie poster created by the Capitol Theatre, 1941. It features information about the showing of "No Greater Sin." Additional text on the poster includes: "Children under 16 not admitted - Auspices Health League of Canada" - 2nd Feature "A Date with the Falcon." 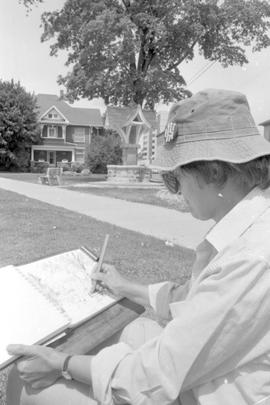 "No Mercy" During Holiday 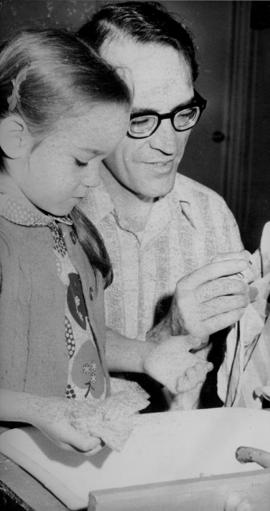 This photograph shows Norm Harrison and his daughter Christine working on an art project together. This photograph was taken at Father's Day at the Hansel and Gretel Nursery at St. David and St. Patrick's Anglican Church.