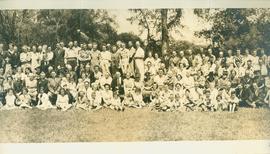 Item is one baptismal certificate for Mary Grace Rowden, issued by the Bible Christian Church, Port Hope, 1867. Stamped on back with registration, and hand written 169712.

Item is a letter written by the Port Hope Methodist Minister John Learoy on 24 May 1886, confirming the marriage of David Haskill and Mary Grace Rowden. Written on church letterhead.

Item is a bible which belonged to Mary Rowden, c1851. The bible was purchased when she was leaving England and arrived in Plymouth. This is written on the front inside cover of the bible. Inside the front cover, there is also a note written by Mary's great grandchild. This bible is not a family bible, it is a personal bible without family information.

The fonds consists of 48 letters written during World War I, transcriptions of the letters, 1 cd and a book titled “Just a Few Lines: A Memoir of William Thomas Miles from the Great War, 1916-1919.” The book is written by Thomas N. Miles and William J. Miles, Will Miles' sons and is based on the collection of letters in this fonds. 47 of the letters are from Will Miles to his mother and 1 is from his cousin Maud to Will Miles. The letters are written between Sept. 30, 1916 and Feb. 18, 1919. Most of the letters are sent from France with a few of them sent from England, Barriefield Camp and Bramshott Camp. The letters discuss Will Miles' day to day life being a soldier during WWI, Flanders mud, lice, hunger and poison gas, meeting girls, complaining of the the food he eats, people being injured or sick, himself being injured, the weather, thanks for recieving parcels, running into old friends and looking forward to coming home in 1918.

File consists of miscellaneous papers created by the office of Geo. Brogdin, 1837-1887.

The fonds contains 12 postcards with images of various locations throughout Ontario, mailed to members of the Morrison family in Tweed, Ontario.

File consists of invoices and receipts for the management of the Estate of Nathan Choate, 1895. It includes: William Williamson; Galbraith Bros.; Dingwall & Ross British American Hardware; and William Waddell.

File consists of invoices, receipts and papers related to the management of the Estate of Nathan Choate, 1899. Includes poster for the closing of the the estate, balance sheets, articles of agreement and lists of bequests. It also includes: G. N. Patterson; Smith & Co.; and Port Hope Evening Guide.